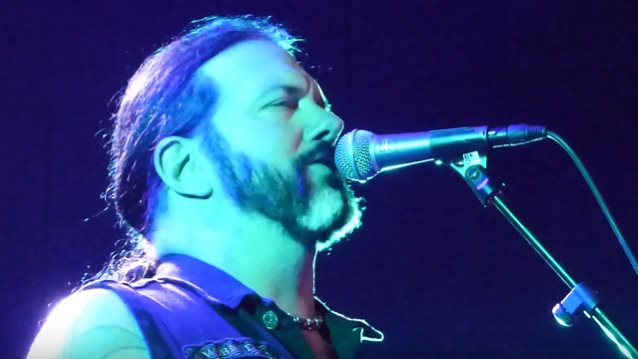 Former MORBID ANGEL and current I AM MORBID/HEADCAT frontman David Vincent says "disagreements" with his now-ex-MORBID ANGEL bandmates won't prevent him from performing the songs he co-wrote.

In an interview with Canal Metal conducted at the tenth edition of the Alcatraz Hard Rock & Metal Festival, which was held August 11-13 in Kortrijk, Belgium, Vincent was asked why I AM MORBID has started to become more active. "Here's the thing: I wrote a lot of songs and there are some very important records and I'm not going to allow disagreements with former [bandmates] to change my ability to perform [MORBID ANGEL songs]," he said (see video below). "They're like children. Just because the parents get divorced, doesn't mean the parents don't care about them."

In addition to I AM MORBID, Vincent currently fronts HEADCAT, the rockabilly outfit once fronted by MOTÖRHEAD mainman Lemmy Kilmister. He also has an outlaw country project under his own name that released a single, "Drinking With The Devil", earlier this year.

"I'm doing a lot of things," David said. "I've really just opened up musically. All of it is important to me, so I'm doing anything that I want to do, I'm going to do it. I'm not going to do things that I don't want to do."

When asked if he had any side projects while he was in MORBID ANGEL, David said: "No. I did not. I've done some various over the years, but this is all me. But see, I'm a bit complicated, so I just decided to give each sort of area of my interests a certain amount of attention. That's how I roll."

Vincent was then asked to reflect on MORBID ANGEL's early days when they were a part of the American death metal scene that also featured the likes of DEATH, DEICIDE and OBITUARY. "You know, a lot of it I don't remember," David said. "I'd say that not as a substance abuser. There's a lot of times when people remind me of things. 'Hey, you remember that day…' Actually, I do. People jog my memory and I'm, like, 'Yeah.' It was a lot of fun. It was a lot of hard work. We didn't have people helping us. In fact, we had people who wanted to do the opposite and just tell us no. It was hard to find the doors to open because we believed in it and with purpose and determination, like warriors, we went in and made it happen. And here we are today."

Vincent also addressed his personal relation to MORBID ANGEL's lyrics that often touched upon the occult and satanic topics. He was also asked if he ever had any confrontations from people taking offense to the band's overt lyrics and themes. "I don't think it's a reaction; I think it's pro-action," David said. "It's proactive. I am who I am, I believe what I believe. I'm not ashamed of what I believe and of course, it's a big part of who I am. It drives me. I don't have any trouble with it anywhere. I'm just me. I don't look for it. Sometimes it finds me and I deal with it when those times come, but, I mean, people want to talk to me about stuff, I'm happy to have a friendly discussion, but I don't get into arguments with people about what they believe. Everybody believes what they believe. I believe what I believe and that's fine."

The new version of HEADCAT recently recorded a heartfelt and rockin' tribute to Lemmy, appropriately titled "Born To Lose, Live To Win". The song was released digitally worldwide on June 23 and was made available on a very limited-edition seven-inch single (only three hundred copies pressed). The seven-inch vinyl singles were available at the band's European shows this August, including at Wacken Open Air, where the band performed two sets throughout the weekend.