DEATH ANGEL Drummer On His COVID-19 Recovery: 'I Truly Believe A Higher Power Saved Me'

DEATH ANGEL drummer Will Carroll says that he "strongly" believes "everyone's collective prayers and positive energy" played a big part in his recovery when he recently woke up from a 12-day coma after testing positive for coronavirus.

The 47-year-old musician was hospitalized at the California Pacific Medical Center in San Francisco after catching the virus on a European tour in March. While comatose at the facility, Carroll said he had dreams of visiting the afterlife. He saw himself leave his body and plummet down to hell, where Satan — a woman in his case — punished him for the deadly sin of sloth, morphing him into a Jabba The Hutt-like-monster who vomited blood until he had a heart attack.

"I woke up on the hospital bed with tubes coming in and out of me, and there was a nurse right there and my first words were, 'Am I still in hell?'" Carroll told the San Francisco Chronicle's Datebook. "She ignored me."

After the New York Postpublished an article on Tuesday (May 19) with the headline "Death Angel Drummer Says He Met Satan During Near-Death Coronavirus Coma", Carroll took to his Facebook page to say that he is not quite ready to embrace "the God thing."

"To make things clear. I'm not some holy roller all of a sudden," he wrote. "I won't be attending church every Sunday and I won't be quoting scripture. I still like and have an interest in evil music, movies, art and literature. But this experience was quite frightening to the point where I truly believe a higher power saved me. What that higher power is I haven't quite figured out.

"I strongly believe that everyone's collective prayers and positive energy played a big part in my recovery," he continued. "Before this nightmare I didn't think something like that was possible and I know for sure that Satan had nothing to do with me being alive today. The vision I had was horrifying and it will stay with me forever. But let's not get carried away with the God thing."

Carroll woke up from a medically induced coma on March 30 after spending nearly two weeks on a ventilator. Doctors told the San Francisco Chronicle he was in critical condition and came close to dying.

Carroll said his near-death experience gave him a new outlook on life.

"I'm still going to listen to satanic metal, and I still love DEICIDE and bands like that," he said. "As far as for my personal life and my experience of what I went through, I don't think Satan's quite as cool as I used to."

On March 22, TESTAMENT singer Chuck Billy revealed that he had tested positive for COVID-19. Several days later, EXODUS guitarist Gary Holt also said that he was infected with the new coronavirus. Both had spent more than a month on the road with DEATH ANGEL as part of "The Bay Strikes Back 2020" European tour in February and March. 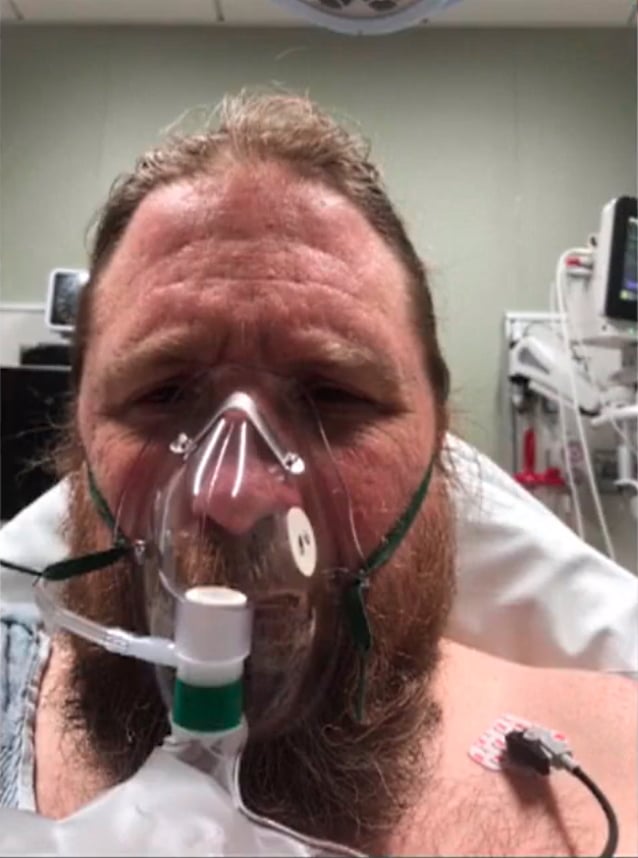