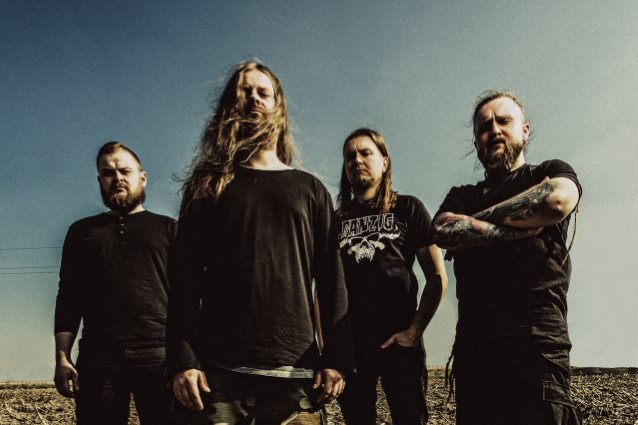 Anthony Morgan of Metal Forces recently conducted an interview with DECAPITATED guitarist Wacław "Vogg" Kiełtyka. A couple of excerpts from the chat follow below.

On the style of new DECAPITATED album, "Anticult":

Vogg: "We thought the album should be a very extreme metal album, but at the same time with lots of melodies — like a crossover album for DECAPITATED. We connected lots of different styles of metal into one piece, and also we thought about making this album not too long. That's why it's thirty-eight minutes, which in my opinion is enough time to deliver all of the interesting ideas we had in order to make this album interesting, and not too long. It's kind of hard to write more than forty minutes of interesting stuff. That was the main goal, trying to make the songs a bit shorter. Yeah, that was the main thing that we thought about."

On DECAPITATED's style changing through the years:

Vogg: "I just feel free to play. I listen to not only death metal. Twenty years ago, I was a death metal kid. I was listening to MORBID ANGEL, DEICIDE, and CANNIBAL CORPSE all the time, so my music was inspired by those kinds of bands. These days, I listen to all kinds of music. I tried to find my own language in the music, and for me, only playing technical stuff these days isn't possible.

"I'm thirty-five years old, not fifteen. When I was fifteen, I tried to show the world how good I was on the guitar and tried to write the most difficult riffs, because I was fifteen years old and had tons of energy. I wanted to show all of the girls that it was cool that I was so fucking perfect on the guitar. These days, I don't care any more about these things. I think about having a good sound from the guitar, and making some nice, catchy riffs and a crushing sound. Everything in my opinion that is sounding good I put into DECAPITATED albums, and that's the only way I can see right now for this band."

On adopting more of a leadership role in recent years, given lineup changes:

Vogg: "There have been a lot of changes in the band's history, yeah, in terms of the lineup. I don't know. I'm the leader of the band right now. In the beginning of the band in 1996 and in 2007, I was kind of the leader, but there was a more democratic system in the band I would say. It was Vitek, my brother, who also created some songs with me, and we created the sound of DECAPITATED together. Right now though, I'm the only original member of the band. I've become the leader of the band, and the backbone of the band. [Laughs] So yeah, that comes from the changes within the band."

Vogg: "He was a down-to-earth guy, the most down-to-earth guy I knew in my life. He was a real friend. Even though he was only twenty-three when he died, he was so measured as a person, like a real natural person. He never got into any problems with other people, and he was always smart with every situation — on tours, or whatever in life. He was a really down-to-earth guy that you would like from the first talk with him. He was always smiling, and he was also such a great drummer. I cannot imagine how good he would have been these days. After twenty years, oh my God, he would have been like number one, or at least one of the best drummers on the planet. He was twenty-three, but he was like, oh my God, such a great drummer. He was in musical school playing piano at twelve years old. He got a feel for music, and his playing and drumming was different; very dynamic and very musical."

On whether the tenth anniversary of Vitek's passing will be marked:

Vogg: "I'm not that kind of guy. I don't really like to mention any anniversaries, especially when it comes to the death of my brother. I don't know. I like to celebrate things like birthdays, or maybe… Some good things, some positive things, like the start of the band, and stuff like that. I don't know. We'll see. I remember it every day, and I remember all of the days with Vitek when we played together, and when we started the band together. We'll see. I don't have any plans right now to commemorate it at all. Maybe the band will play together. If this would make the fans happy, then we will go for it, but we'll see."