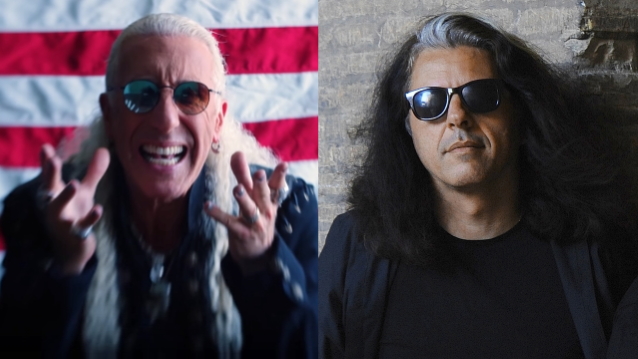 TWISTED SISTER's Dee Snider and TESTAMENT's Alex Skolnick have called on lawmakers to enact tougher guns laws after back-to-back mass shootings in the United States left at least 29 dead and dozens injured in Texas and Ohio on August 3 and August 4.

In El Paso, a gunman opened fire as customers crowded into a Walmart during the busy back-to-school shopping season Saturday morning, leaving 20 people dead and another 26 wounded. Just hours after the El Paso attack, a mass shooting in Dayton, Ohio, left at least nine people dead and 26 wounded.

Earlier today, Snider took to his Twitter to write: "As a 2nd Amendment supporter & a concealed carrier I have to say something must be done with our gun laws. 'Arming the general populace' didn't work in El Paso. That city has open carry, concealed carry & campus carry - it is gunned up. It did NOTHING to stop the mass shooting."

Skolnick, who made headlines last month for saying that America has "the weakest gun laws in the developed world," also weighed in on the latest mass shootings in a discussion on his Instagram. Addressing one fan's comment that he should "stick to [his] music" and that "problems run much deeper than guns and the 'control,'" the guitarist wrote: "I don't see how it affects your rights if the type of high powered weapon used today in El Paso — and so many other mass shootings that it's becoming a regular occurrence — is treated like an airplane, requiring training, licensing, vetting and not purchased fairly easily in some states. You should have to earn that privilege for such weapons — not talking about more standard rifles & pistols with which you can still have your 2nd Amend. Right. But if someone has a manifesto to kill as many people you don't like as possible (like the suspect in Texas does) and openly praises other mass killers like the New Zealand shooter (as the Texas suspect did on social media),then SORRY, he should not have the right to own one of these hi-powered weapons of war. No one's coming for your 2nd Amendment right but it's time to recognize our right not to get shot in this matter by this type of inidivividual with this type of weapon."

BLACK VEIL BRIDES frontman Andy Biersack also called on Washington, D.C., to make changes after the Dayton and El Paso shootings, writing on Twitter: "It's difficult to put into words the sorrow I feel for those impacted by this continuous senseless violence. It's clear that something needs to change. My heart is with you Dayton and El Paso. We must find a way through this darkness."

President Donald Trump, who is spending the weekend on his golf resort in Bedminster, New Jersey, addressed the mass shootings in El Paso and Dayton in several tweets Sunday morning, saying: "The FBI, local and state law enforcement are working together in El Paso and in Dayton, Ohio. Information is rapidly being accumulated in Dayton.

"Much has already be learned in El Paso. Law enforcement was very rapid in both instances.

"Today's shooting in El Paso, Texas, was not only tragic, it was an act of cowardice. I know that I stand with everyone in this Country to condemn today's hateful act. There are no reasons or excuses that will ever justify killing innocent people."

Skolnick has made no secret of his political views, ocassionally tweeting against Donald Trump's policies, including imploring the U.S. president to "get the HELL out of OUR country" in August 2017 after Trump tweeted about his proposed border wall while Tropical Storm Harvey made landfall in Texas.

Back in 2012, Skolnicktweeted that Ted Nugent, Donald Trump and Dave Mustaine didn't "seem that reasonable" to him because of their "militant" support of then-Republican presidential candidate Mitt Romney.

In 2017, Snider — who got to know Trump personally after appearing more than once on "The Celebrity Apprentice" — said that he could no longer be friends with the billionaire real estate mogul because he did not share the president's views on important issues, including the Trump administration's harsh immigration policy.

As a 2nd Amendment supporter & a concealed carrier I have to say something must be done with our gun laws. "Arming the general populace" didn't work in El Paso. That city has open carry, concealed carry & campus carry - it is gunned up. It did NOTHING to stop the mass shooting.

It’s difficult to put into words the sorrow I feel for those impacted by this continuous senseless violence. It’s clear that something needs to change. My heart is with you Dayton and El Paso. We must find a way through this darkness.