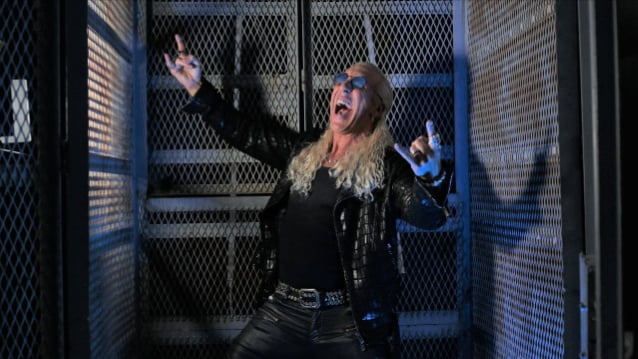 Dee Snider has blasted the BLABBERMOUTH.NET commenters as "pathetic troll losers," saying that they served as the inspiration for his new song "Open Season".

The TWISTED SISTER frontman made the comments after BLABBERMOUT.NET published an excerpt from his interview with "The MetalSucks Podcast" in which he weighed in on the David Ellefson sex video scandal, expressing his bewilderment over the fact that "the art" was "being dismissed, thrown out, devalued and disqualified because the artist turned out to be a fallible human being."

After one of Dee's Twitter followers wrote that the comments below the Ellefson article "hurt my head," Snider responded: "Blabbermouth is great to me, but their trolls are the biggest losers of the bunch. #patheticpussies". Another Snider follower tweeted that "Twitter is the Blabbermouth comment section", to which Dee replied: "Not even close to those cretins!" He then added: "I've got a song on the new album I wrote with them in mind: 'Open Season'. I'll wait for the album to come out before I 'chum' for those pathetic troll losers. In the meantime I would love to interview with @BLABBERMOUTHNET about the song I wrote inspired by their commenters!"

Snider later tweeted out a link to BLABBERMOUTH.NET's 8.5-out-of-10 review of his new solo album, "Leave A Scar", from longtime U.K. journalist Dom Lawson, and he wrote: "THANK YOU @BLABBERMOUTHNET ! You have always been supportive! We need to talk about 'Open Season'! It was inspired by your rabid comment section! LOL!"

Insisting that he was not bothered by Internet detractors, Snider said during an episode of his "I Wanna Talk" podcast: "Blabbermouth… posts a lot of articles about me. A lot of magazines and web sites posts articles about me, but I know that Blabbermouth, the articles are totally legitimate, totally fair — they never take a cheap shot — yet I quickly learned that if you go to the comments, there are people just there to assault. The losers are just sitting there just attacking everything. And I just read a few of them the first time, [and I] laughed. Okay. I get it. That's the Blabbermouth reader, or at least the Blabbermouth commenter. And I don't read 'em anymore. [I] go to sleep. I sleep nice. No aggravation. No freaking out. No stamping my feet. No tantrums. Because there's some pussies — an old term, but I still use it — assholes out there, who, in the dark, talk…?"

Dee continued: "I've dealt with these people in concert situations. I used to really deal with them a lot more back in the old days. And it was great then, because when you got these haters in the crowd, in the club days, in the bar days… It stopped pretty much after we hit the big time. Most famously, I called out the entire audience at the Reading festival in 1982. But you could respond. [If] a heckler says something, you could say something back, you could address it at the moment. And if it escalates, you can deal with it at the moment. You're dealing with ghosts on social media — just losers sitting in the dark, spouting. It's impossible to fight them. So… block, block, don't look, turn away, turn it off, don't answer. These are the solutions to so many of your problems."

Snider added: "Wrestling, arguing with social media trolls? With the haters, with the ugly people? I don't… It doesn't register."

Dee's fifth full-length solo album, "Leave A Scar" will be released on July 30 via Napalm Records.

THANK YOU @BLABBERMOUTHNET! You have always been supportive! We need to talk about "Open Season"! It was inspired by your rabid comment section! LOL!
Leave A Scar - DEE SNIDER https://t.co/a71nhBaQMV

Not even close to those cretins! https://t.co/JlqDyvvdlv

Blabbermouth is great to me, but their trolls are the biggest losers of the bunch. #patheticpussieshttps://t.co/rGKE1Pqb8t

Man...what language do I need to speak for people to understand what I'm saying. It wasn't about accepting the actions, the question is do the actions dismiss the creativity/art that we love? https://t.co/lEhAXVxdWJ