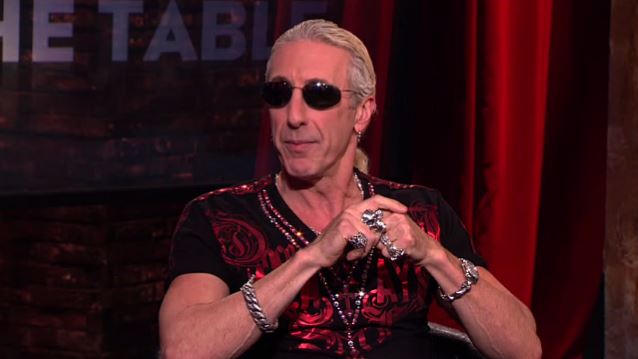 X17 spoke with TWISTED SISTER singer Dee Snider as landed at Los Angeles airport this weekend, returning early from vacation with his wife, Suzette Snider, after finding out about the untimely death of his friend and bandmate, TWISTED SISTER drummer Anthony Jude "A.J." Pero.

Said Snider (see video below): "[A.J.] was out on tour with a band called ADRENALINE MOB, and he had a massive heart attack in his sleep and we lost him. He was the first member of the band to die, and it's very sad."

Asked how you replace someone like Pero, Snider said: "You don't. I mean, will we continue to play? Probably, for [A.J.'s] family. 'Cause his family will benefit from us playing, financially."

He continued: "It was all five original members of TWISTED SISTER, and he's the first one we lost. And the band is heartbroken."

Pero died at the age of 55 while on tour with the band ADRENALINE MOB. After members of that group failed to rouse him on their tour bus Friday morning (March 20),he was taken to a Poughkeepsie, New York hospital and pronounced dead of an apparent heart attack.

Pero joined TWISTED SISTER in 1982, leaving the band in 1986 but returning in 1997. He remained a member of the group, which has toured on and off over the past 15 years, to this day. He played drums on six of the group's seven studio albums, except for 1987's "Love Is For Suckers".