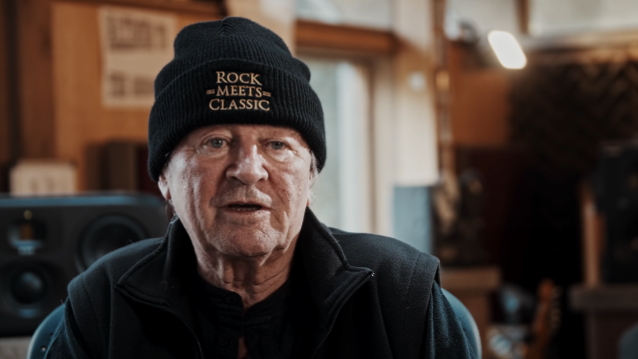 In a new interview with Spain's RockFM, DEEP PURPLE singer Ian Gillan discussed his apparent unwillingness to perform the band's classic song "Child In Time" live. He explained (as transcribed by BLABBERMOUTH.NET: "No, no. It's not possible. I could drop the key down, but it wouldn't sound the same. I always make the analogy… When I was young, I used to be an athlete, and I used to do the pole vault; that was my sport. And when I was 25, I couldn't do the pole vault anymore. At 26, no, forget it. I can't do it.

"I always thought of 'Child In Time' not as a song but more like an Olympic event. It was so challenging. But yeah, when I was young, it was effortless. So we got to the point when I got to about 38 years old, and it just didn't sound right. So I thought, 'Better not to do it badly. Better not to do it.' So it's been the same, and I never looked [back].

"When I was 38, when I made that decision, I thought, 'My god. I'm nearly halfway through my life now,'" Gillan added. 'And it made me think about the future. Do I want to be a singer for the rest of my life? Well, of course. I must. I've been singing since I was five years old in a church choir, or since I was eight. And my whole family was musical — singers, musicians. And so, what do I do then? I don't wanna just be known for this scream, as it was called; I don't wanna be screaming when I'm 80 years old or 70 years old. It's undignified. But here I am, at 77, and I'm still screaming — up to a point. But the control element and the elevation of that note is beyond me, to be honest."

"Child in Time" was originally featured on DEEP PURPLE's 1970 album "Deep Purple In Rock". It was last performed by the band on its 2002 European tour.

DEEP PURPLE bassist Roger Glover previously talked about Gillan's reluctance to perform "Child in Time" during an August 2020 interview with Noise11.com. At the time, he said: "This happened quite a few years ago. He drew a line in the sand. He said, 'I'm not gonna sing that song anymore.' And that was a personal decision. And we have to abide by that, because he's our singer, and we respect that.

"We wrote that song when we were 24, and when you're 24, you can do things a lot differently than you can when you're 74," he continued. "I think it was also spoiled a little bit by politics in the band back in the days. Ian Gillan, one night, couldn't go on and he said, 'I've got a cold. I can't do 'Child In Time' tonight.' And [then-DEEP PURPLE guitarist] Ritchie [Blackmore] went on and started playing the opening chords. Of course, the audience went nuts, and Ian was forced to do it. So it became a bit of a cause célèbre. And as Ian got older, he tried to do it, but we didn't wanna cheat and have the top harmony played by a sampler or a guitar or something like that. And so he said, 'That's it. I'm not singing that song ever again.' And it's not that he's not proud of it; it's just that he doesn't wanna sing it. And this was… I don't know how long ago this was… Ten, fifteen years ago."

DEEP PURPLE's latest album, "Turning To Crime", came out in November 2021 via earMUSIC. The LP contains DEEP PURPLE's versions of great rock classics and musical jewels — including songs originally recorded by Bob Dylan, FLEETWOOD MAC, Bob Seger, CREAM and THE YARDBIRDS — carefully chosen by each member of the band.