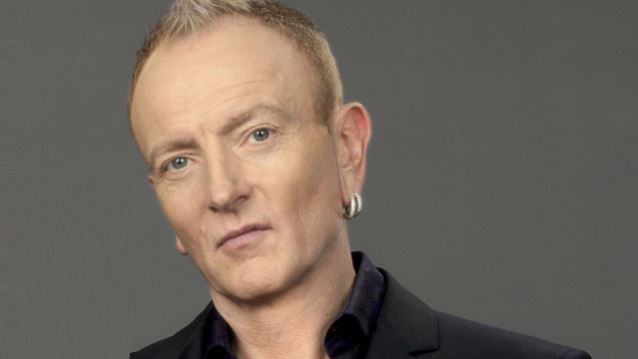 DEF LEPPARD guitarist Phil Collen was was recently interviewed by Mike Hsu of the Worcester/Boston, Massachusetts radio station WAAF. You can now listen to the chat below. A couple of excerpts follow (transcribed by BLABBERMOUTH.NET).

"It's gonna come out in October. We've actually done some backing vocals on it the other night. We just put the finishing touches and final mixes. It's great. It's probably the most diverse thing we've done. And I think it's the best thing we've done since 'Hysteria'; I really do. I've said that, and I've heard that come back as a quote, and I sincerely believe it. It's the loudest rock guitars we've ever had on some tracks. Some of the stuff we've done as a band in the studio — we all played along live and then added to it — and then other tracks were pure studio stuff. We've done it in three sessions. We thought we were going to do an EP, or a single, and we came out with twelve songs, and now we've got fourteen. I think we've done it for the right reasons. There wasn't any industry… you know, no record company executive, or anyone, saying, 'You've gotta do an album.' It was purely because we wanted to write songs and we felt the need to do that. Back in the old days, STONES and ZEPPELIN, James Brown, you know, THE BEATLES… they would do stuff like that. David Bowie… They'd go into the studio when they had an idea and they'd record it. We'd done it like that, and it has a way more fresher kind of sound for it. The integrity in it is just amazing, so you can hear that in the grooves. But, yeah, it's great."

On the word "experimental" being used in connection with the new DEF LEPPARD album:

"I don't think that's the right word. I think 'Hysteria' was experimental, because we were using all this new technology. This is more just expressive, is the right word. Instead of pandering to anyone — whether it be fans, a record company or whatever — we actually have just done our own thing. There was a purity to it that we haven't had before. There wasn't one time when someone said, 'Oh, I don't think it's gonna work.' Everyone tried it. And I don't know whether that's experience or what. It's certainly not age, 'cause most people, they get a little more uptight as they get older, but this is… It's the opposite; there's a more relaxed feel, and, because of that, it kind of flows. So I don't think 'experimental' is the right word. I think it's more liberating and expressive, is the way I would go with it."

On DEF LEPPARD guitarist Vivian Campbell continuing to tour with the band while battling Hodgkin's lymphoma:

"He got the 'all clear,' and then he had done the stem-cell therapy and stuff, and then they found something more. Me personally — and I said this to the [other DEF LEPPARD] guys — I said, 'If I ever get sick or anything, I just trust you guys to have my back, 'cause we've been together for so long.' I would have personally probably done it a little differently. I would have actually taken a bit of time off and corrected that. But, with Viv, he doesn't wanna sit around; he actually wants to be out there. He'd feel worse if he was at home. So it depends on who you are. I'd just be a different kind of person. I [would focus on getting] healthy and I'd stay home, stay on the couch… whatever it took. But he chose this route. Yeah, it's really cool. He would rather be out, on stage, on tour, than doing that. So, yeah, more power to him. That's great."