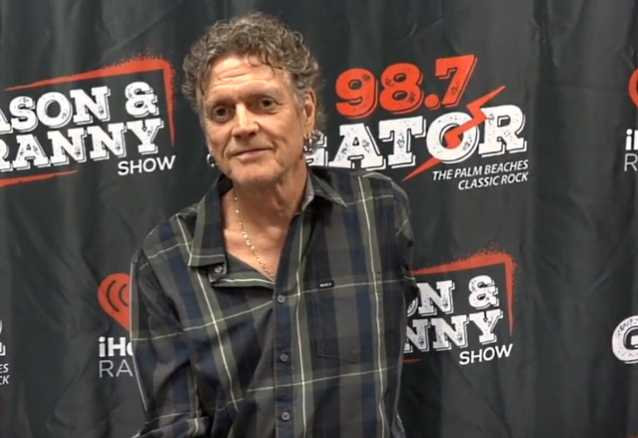 For the second year in a row, DEF LEPPARD drummer Rick Allen and his Raven Drum Foundation have joined forces with an amazing group of drummers for their "12 Drummers Drumming" charity auction.

Proceeds from the auction go to support Raven Drum's mission to provide trauma recovery and healing for veterans and to help reduce the rate of suicide.

This year's "12 Drummers Drumming" launched on Veterans Day (November 11). The auction will conclude at noon PST on December 12.

Speaking to the 98.7 Gator radio station, Allen stated about "12 Drummers Drumming": "Well, the first time we did it was last year, and it was a huge success. I called up a bunch of my drummer friends. And the drumming community have just been incredible; they show me so much respect. And a lot of these players are just world class. So we're doing it for a second time this year. And this year we've got Stewart Copeland onboard; Tommy Lee came onboard; Matt Sorum — I mean, they're all there, and they're all helping out with '12 Drummers Drumming'.

"If people go to 12drummersdrumming.org, it'll kind of explain everything, and you'll be able to view a lot of the really unique items that all the drummers have donated for auction. So check out what it's all about. And it's chance to get something really that is one of a kind."

Building on the success of Raven Drum's inaugural "12 Drummers Drumming" auction, the foundation invited a group of drummers and other friends, select donors, veterans, and first responders to join Allen and Monroe for a very special live event in Newport Coast, California on September 26. The drum circle was a celebration of the healing benefits of music. Through a partnership with Musicians On Call, the program was filmed, and highlights are being included in Musicians On Call's Veterans Day virtual concert that is being provided to VA hospitals across the country. The full event recording is offered exclusively to the VA until December 12, culminating in a live Zoom question-and-answer call for the VA community with Allen, Monroe, and special guests. Following that, the program will be available across multiple channels and partner sites.

Allen, who had a life-changing experience when he lost an arm in a car accident in 1984, spoke to TimesUnion.com more than a decade ago about the Raven Drum Foundation, which he founded with Monroe to share his journey and help others discover their own paths to recovery.

"Looking in from the outside, some people may think that I'm doing this completely for other people's benefit," he said. "But really, it becomes this fantastic two-way street, where I meet some of the most incredible people who inspire me to go on as well and just to be a better person.

"You know, people have said to me: 'I don't know what I would have done if I'd have gone through what you went through.' I just turn around and say, 'Well, neither did I.' Until you discover that part of yourself, it's inexplicable. You just have to go through the experience, and somehow you're inspired."