DEF LEPPARD guitarist Vivian Campbell says that he hopes that reports of his band being introduced by Republican presidential candidate Donald Trump at next month's Iowa State Fair are untrue, because doesn't want his name associated with "this clown."

CNN reported last Friday (July 17) that Trump will handle the introductory duties forDEF LEPPARD at August 15 concert at the State Fair Grandstand on the fairgrounds in Des Moines.

But, according to Campbell, he has no knowledge of Trump making an appearance at DEF LEPPARD's gig, which is also set to feature STYX and TESLA.

"I really, really, really hope that there's no truth to this rumour," Vivian wrote on his Facebook page while posting a link to the CNN story. "DEF LEPPARD have never been a political band, and if we were, I for one wouldn't be associating my name with this clown."

Trump is doing well in the polls despite his controversial comments characterizing illegal Mexican immigrants as criminals. In his June 16 speech announcing his candidacy, he said of people crossing the border from Mexico, "They're bringing drugs. They're bringing crime. They're rapists. And some, I assume, are good people."

When asked if he was offended by Trump's controversial statements on immigration, KISS bassist/vocalist Gene Simmons, who immigrated to America from Israel at a young age with his mother, told FOX Business Network's "After The Bell": "I believe Donald Trump is a good man. I think he's smarter and better than using incendiary language."

DEF LEPPARD recently completed work on its eleventh album, which will be a self-titled affair. An October release is expected. 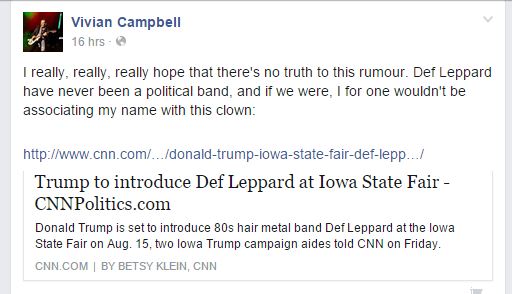 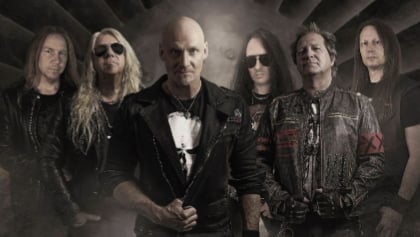