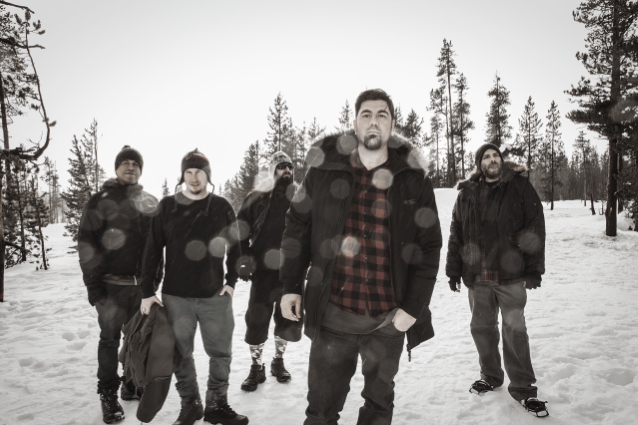 DEFTONES' ABE CUNNINGHAM On Upcoming Album: 'We Can't Help But Sound Like Ourselves'

DEFTONES drummer Abe Cunningham has offered an update on the band's follow-up to 2016's "Gore" album, which was recently recorded for a tentative late 2020 release. Speaking to Download presenter Kylie Olsson, Abe said (see video below): "We actually tracked everything [for the new LP] over the summer [of 2019]. Last summer — June and July — we were in the studio tracking. And we're just taking our time. But we actually just completed everything. We were down in L.A. recording, but we mixed up in Seattle. We're working with our old pal Terry Date, who [produced] a bunch of our earlier records. He's up there [in Seattle]. With this while distancing thing, it was a bit rough, but we figured out a way to kind of do the mixes without being there. It's a lot better when we're all in the room; we can knock it out quick and argue and do our things. But, yeah, we just completed that. It's getting mastered right now, and that's been the main thing. So it's been something to do in this strange off time."

Asked about the sound of the new DEFONES material and whether it is "heavier" than "Gore", Abe said: "It's all that. It's always hard to describe it. I'll say this… We can't help but sound like ourselves, but just being back with Terry, there's certain sounds that we developed with Terry that kind of became sort of our core sounds, and those are back again."

As for a possible release date, Abe said: "Maybe September. I heard something. I can't remember."

In a recent interview with Apple Music, DEFTONES vocalist Chino Moreno stated about the band's decision to reconnect with Date for the new album: "We've always wanted to go back and make records with him again… We love Terry. He's pretty much been there since the beginning of us making records, and we just vibe with him really good. I mean, he's super easy-going. He's not a producer that is in there trying to push his ideas into what we're doing other than just capture what it is that happens when we get together, as well as speaking up and telling us when stuff isn't where it should be or whatever. So he's just a great dude, and making this record with him was awesome. I think our main goal was to make sure that everybody in the band was involved, to an extent. I think our best records are when we're all firing on all pistons, each one of us individually and collectively. So that was, I think, the only thing that we aim for, really."

Earlier in the month, DEFTONES postponed their 2020 European tour due to the coronavirus pandemic sweeping the globe. The trek, which was originally set to kick off on June 9 in Lyon, France, will now take place next year.

DEFTONES have released eight studio albums to date and have sold over ten million albums worldwide.

"Gore" bowed at No. 2 on the Billboard Top 200 in 2016, moving over 71,000 units first week and marking DEFTONES' highest chart position in 13 years. The band also curated, launched, presented and headlined its own festival, Dia De Los Deftones, in 2018. Selling out both installments to date, the eclectic lineups hosted everyone from FUTURE and CHVRCHES to GOJIRA and MEGAN THEE STALLION.