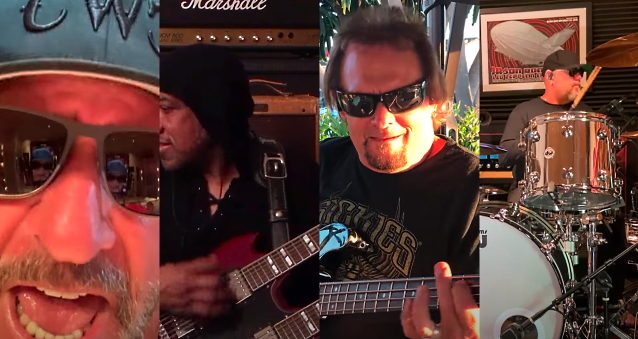 After previously connecting via their smartphones from four separate locations to lay down a brand new song titled "Funky Feng Shui", as well as covers of THE WHO's "Won't Get Fooled Again", VAN HALEN's "Good Enough", BOB MARLEY & THE WAILERS' "Three Little Birds", BUFFALO SPRINGFIELD's "For What It's Worth", Little Richard's "Keep A-Knockin'" and AC/DC's "Whole Lotta Rosie", among others, they have now regrouped — in a virtual sense — to cover VAN HALEN's "Right Now". Check out video of the performance below.

Hagar said: "When I wrote this song with Eddie Van Halen over 30 years ago I had no idea it would be so relevant today. #LetTheMusicDoTheTalking #StopTheViolence #GivePeaceAChance"

Last month, SAMMY HAGAR & THE CIRCLE's U.S. tour with NIGHT RANGER was officially canceled due to the coronavirus pandemic which is sweeping the globe. Produced by Live Nation, the outing was scheduled to kick off July 9 in West Palm Beach, Florida at iTHINK Financial Amphitheatre and make stops in Tampa, Cincinnati, Dallas, Phoenix and more, before wrapping September 20 in Chula Vista, California at North Island Credit Union Amphitheatre.