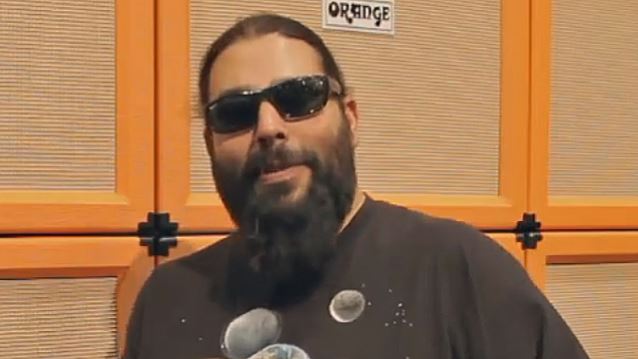 DEFTONES Guitarist Didn't Want To Play On 'Gore' Album: 'It Wasn't The Style Or The Sound I Was Hoping We Would Take'

Ultimate-Guitar.com recently conducted an interview with DEFTONES guitarist Stephen Carpenter. A few excerpts from the chat follow below.

Ultimate-Guitar.com: Are there any songs or guitar parts on the new [DEFTONES] record ["Gore"] that you're really proud of or really excited for the fans to hear?

Stephen: Oh, god. I think my proudest thing about my guitar playing on this record is just playing on the record, because I didn't want to play on the record to begin with. It wasn't until way later once I actually got into it. I look at all the songs on the record and they were all a challenge for me to get into.

Ultimate-Guitar.com: What do you think that barrier was for you?

Stephen: I don't know. I just really like metal, and I love all the metal that's being played now. I wish everybody would stop saying "djent" though. That's just dumb. It's just metal.

Ultimate-Guitar.com: So, you were saying that you were having a hard time getting into playing on this new album. Why do you think that was?

Stephen: When we were coming up with ideas and writing the songs, the stuff that was being written, you know, the other guys' ideas, I wasn't too interested in it. It wasn't the style or the sound I was hoping we would take. It wasn't what I was expecting or wanting.

Ultimate-Guitar.com: That says a lot about you seeing yourself as part of a band and going in the direction of the band. It's unselfish.

Stephen: Yeah, I hear ya. My band is going one direction and I am going another one currently.

Ultimate-Guitar.com: That's not saying that you're going to leave the DEFTONES, is it?

Stephen: I would never leave the band that I started, but the band started leaving me. I can't control that.

Ultimate-Guitar.com: That's a democratic way to look at it, really.

Read the entire interview at Ultimate-Guitar.com .

"Gore" will be released on April 8 via Warner Bros. Records. The album was produced by Matt Hyde and DEFTONES.