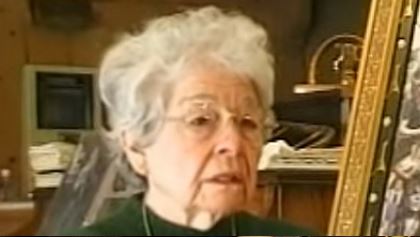 Delores Rhoads, the mother of legendary OZZY OSBOURNE guitarist Randy Rhoads, has reportedly died at the age of 95.

Said Ozzy in a statement: "I am deeply saddened to hear of Mrs. Rhoads passing. She was a wonderful woman and will be missed. I have no doubt she is reunited with her son Randy."

Delores was born in San Bernardino on March 30, 1920, and started both learning music — and teaching — from a very young age. In 1948, she founded the Musonia music school, where all three of her children would also become students.

"When she was nine, her teacher told her she had too many students, and she needed my mom to take some on," Randy's brother Kelle told Patch.com. "So she started teaching then. All in all, she taught for 78 years."

He continued: "My mom is a real, true dyed-in-the-wool musician of the old school. One of her professors was Arnold Schoenberg. Her dad was a doctor during the Depression, and he took a horn in on trade, 'cause people couldn't pay him, and he was sick of eating oranges. So he took this cornet for her. She took to it. And her cornet teacher was Herbert Lincoln Clarke, who was John Phillip Sousa's first cornetist. She is a direct link to people who learned their craft in the 19th century.

"She plays 15 instruments; her main instruments were trumpet and cornet. She primarily excelled in brass. She changed a policy at UCLA when she was a music student there. A woman couldn't sit first-chair in the brass section. Until my mom. My mom challenged this because she was so much better than the guys. So they had a little contest, she smoked them, and she was the very first woman that got to sit first-chair in a brass section. In the very early '40s. She graduated in 1944 and got married. Plays piano, violin, flute, flugelhorn."

Asked when Randy's flair for music really began to show itself, Delores said in an interview: "In my school, I always have groups where the students who take private lessons can play as an outlet. It's geared to be like a school orchestra or band group. One number that Randy especially liked to play was 'Chattanooga Choo Choo'. He couldn't have been more than eight years old at the time, maybe younger. But he would sit there and play his heart out because he enjoyed it. He was taking things a little on his own even then. His friends flocked to him to listen to his playing, but Randy wouldn't settle for that simple type of band music to play for his friends. He would branch out and do things that I wouldn't even know, which were probably the current hits of that time. He was learning to read music. A little later down the line we entered our group in a local competition. Randy took off on a little bit of lead at that point and on the judges comments they mentioned that the guitar didn't fit with the proper school type thing, They said the guitar was playing all over the place."

Sad to hear of the passing of Delores Rhoads, Randy's mother and lifelong music educator. pic.twitter.com/xbilVjFz1W