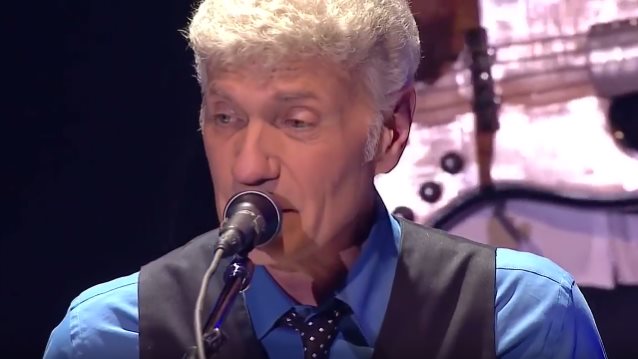 DENNIS DEYOUNG Says He Was 'Thoroughly And Totally' Shocked By STYX's Decision To Bring Back 'Mr. Roboto'

Former STYX vocalist Dennis DeYoung says that he was "totally shocked" by the band's decision to perform the song "Mr. Roboto" live in its entirety for the first time in 35 years.

"Mr. Roboto" — which originally appeared on STYX's 1983 concept album "Kilroy Was Here" — was written by DeYoung, who left the group in 1999. The song reached No. 3 on the Billboard Hot 100 and topped the charts in Canada, but guitarist Tommy Shaw's reported dislike of the song and direction of the group's concert performances — which, in keeping with the album's concept, featured bandmembers acting out certain roles — led him to leave the band at the completion of the "Kilroy" tour. He eventually returned in 1996.

DeYoung addressed "Mr. Roboto"'s re-emergence during a recent interview with SiriusXM's Eddie Trunk. He said: "I think essentially, the whole thing is, to me, a joyful experience, 'cause look, I love those guys, okay? I don't care what they've said and thought about me. I do. Tommy and JY [James Young, guitar] and Chuck [Panozzo, bass] to a lesser degree, 'cause he's not around all the time, we went to battle together, we went to war. You know what that war is? The war against every other rock musician in the world to get to the penultimate, which means the top of your profession.

"None of that music was created by one person," he continued. "People would bring in songs, we'd collaborate, but, really, the arrangements of all those songs were the collective minds coming together to make those records. And so the fact that they, after all these years of, to say the least, slagging it off and blaming it for everything but Ebola, I'm happy they're playing it, because it's for the fans.

"What happened back in 1999 when Tommy and JY decided to replace me when I had gotten ill, by doing that, they actually split the fanbase in a way that I could have never imagined and it's broken my heart for these past 18, 19 years, because what the result of it was people having to take sides," Dennis added. "Why would they have to take sides? We were together; we were a group; we were a team; we wanted people to love STYX. Sure, if somebody loves this guy more than that guy… 'Oh, I like Paul more than…' 'Okay, good for you'… rather than John. But the ultimate thing is it was a band, it was a real band with one name — a four-letter word, STYX. So all this consternation and all this kind of chatter, about, 'Oh, it's bad and it did this and it did that,' which has really got into the culture, along with the song 'Mr. Roboto', which has become… Listen, millions of people like that song. I'm sorry. Do I have to apologize? I hope not.

"The only thing that saddens me — not the only thing, but the thing that saddens me the most — is to read from time to time the comments about all of us — not just me, but Tommy and JY as well — where people have taken sides and spewed that vitriol on us as a group. It's just wrong, it's counterproductive, and I think it hurts our legacy, which, to me, is the most important thing. Because I didn't do this thing to be a flash in the pan; I did this thing to create something that will live longer than myself, and I think we've done that. But a lot of damage has been done to our fanbase, and I regret it and I've apologized to them. And a lot of times when I hear people saying these things, bad about my former bandmates, I don't want 'em to feel that way; I don't want 'em to feel that way about me. Heck, we did this together, so the fact that 'Roboto' was resurrected, I'm happy from this one point of view: the song was different, but it was good. Millions of people liked it, millions of people still like it, and I don't think we should apologize for that."

DeYoung went on to say that he was surpised by STYX's inclusion of "Mr. Roboto" in the setlist for this summer's shows. "After all this time, I'm really happy that they've just come to the realization that this is nothing to be ashamed of, for god's sakes," he said. "It was an experiment; we tried it; the show was marvelous; it was fantastic. It was wildly entertaining. And I just say, was I shocked? Thoroughly and totally, 'cause I believed, like so many of the followers of the current band — of 'TOMMY STYX' right now, people call it — those people committed to the idea that they should dislike this song and me at the same time. And I keep saying to myself why, why do this? It doesn't make sense to me. So now I look at it and I think all those people have literally been thrown under the bus by this reversal of fortune. Because they told them one thing, and now they're playing this song. But, really, I don't have any hard feelings toward those guys — I don't. If they call tomorrow for a reunion, I've pushed it; I've said it for 18 years; I wanna be in the band; I should be in the band; it's exactly what the fanbase wants."

STYX vocalist/keyboardist Lawrence Gowan recently said that the conversation about playing "Mr. Roboto" again started about five years ago on the band's bus. "It was the experience around that concept record ['Kilroy Was Here'] that left the band at odds with each other, but that's not disparaging of the song," he said. "That's the part that you have to separate from it. I was all for it, because for a song like that to last as long as it has with numerous cultural references to it, it's part of the history of the band."