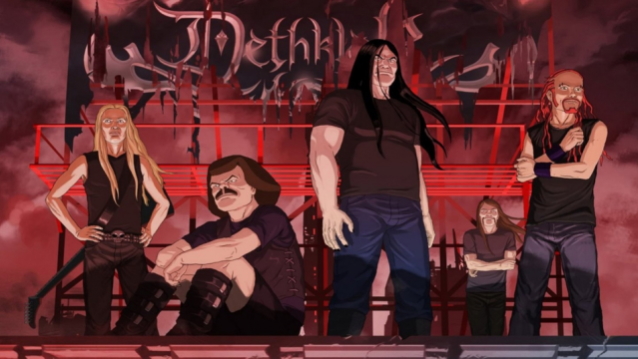 DETHKLOK, the stars of the Adult Swim series "Metalocalypse", will co-headline the 2022 Adult Swim Festival Block Party, set to take place August 5-7 across four venues — The Fillmore, The Foundry, Punch Line and Brooklyn Bowl — in Philadelphia, Pennsylvania. DETHKLOK will play on August 7 at The Fillmore. Also scheduled to headline the event are RUN THE JEWELS (August 5 at The Fillmore) and TIERRA WHACK (August 6 at The Fillmore). In addition to music, there will be "live panels, exclusive premieres, watch parties, games, giveaways, and merch."

DETHKLOK last performed in November 2019 as part of the Adult Swim Festival at the Banc of California Stadium in Los Angeles. The show marked DETHKLOK's first live appearance since taking part in the 2014 edition of Festival Supreme in L.A. DETHKLOK played a 19-song set that included live premieres of the tracks "Impeach God" and "Comet Song". Joining mainman Brendon Small (guitar, vocals) at the gig were Gene Hoglan on drums, Nili Brosh on second guitar and Pete Griffin on bass.

Last year, Adult Swim announced that it will produce a new original movie based on "Metalocalypse". The movie will be released globally on Blu-ray/DVD and on digital transactional video on demand (TVOD) and electronic sell through (EST) for a 90-day exclusive window, followed by premieres on HBO Max and Adult Swim.