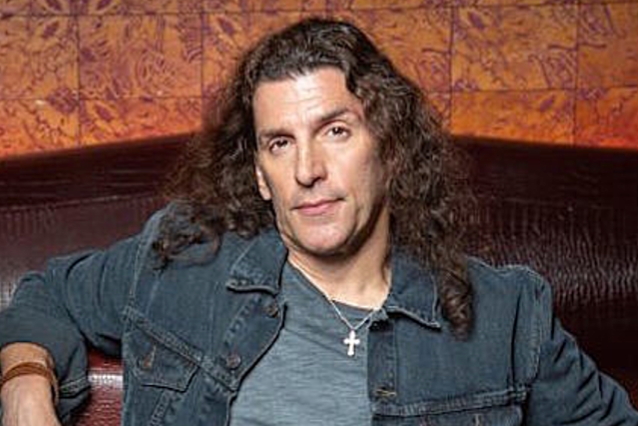 During an appearance on the latest episode of "The Mistress Carrie Podcast", ANTHRAX bassist Frank Bello was asked if he would agree with the assertion that BLACK SABBATH singlehandedly and unintentionally invented heavy metal with the release of its 1970 self-titled debut album. He responded (as transcribed by BLABBERMOUTH.NET): "Look, you're asking a SABBATH fan. Of course. For me, it's right there. Listen to 'Black Sabbath'. For me, yeah, I grew up on that, so I have to say yes to that. And they still stand up — those songs still stand up. So, yeah, for me, yes. Sure, everybody else can say a bunch of other bands; it's all very personal. For me, yeah. That was the first heavy guitar that I heard like that — Tony Iommi's guitar. Geezer [Butler], the way he plays with a kind of distorted bass and just these great jazz bass lines, that was all a great time. It was a great mixture of heavy. There was great stuff, heaviness, coming in. So, for me, yes."

Bello's ANTHRAX bandmate Scott Ian has previously gone on record as saying that SABBATH was the first heavy metal group.

"People can argue this, and I do get into this nerd arguments with my friends sometimes when we're drinking, but, for me, it's BLACK SABBATH," Scott said during a 2016 appearance on the SiriusXM show "Sway's Universe". "It all started with them. You had these guys who lived in Birmingham, England, in a really depressed, post-World War II manufacturing town, and it just made sense that the music they started making just had this really dark, heavy sound. And for me, the first three or four BLACK SABBATH records are kind of the blueprint for heavy metal. Tony Iommi wrote every riff there was to write, and everything that came after was just a derivative of it in some way, shape or form. But, for me, it all started with BLACK SABBATH."

In 2018, ANTHRAX drummer Charlie Benante picked BLACK SABBATH's "Vol. 4" (1972) as one of the records that changed his life.

"My next-door neighbor would play it outside constantly," he told Classic Rock magazine. "'Vol. 4' was always played — all the time. I swear, I knew those songs like the back of my hand. Coming from a Catholic upbringing, there was a record store about 15 minutes away from us, and me and my friends used to always go to this place — called Records And Stuff. And they used to sell these iron-on shirts. I remember coming home with this BLACK SABBATH shirt that had '666' on it, and my mom freaked out and made me take it back. She would not have it in the house."

In a 2010 interview with U.K.'s The Times, BLACK SABBATH drummer Bill Ward reflected on the fact that it wasn't until the mid-1970s that the term "heavy metal" emerged for the music that he and his bandmates played, although they initially had no affection for it. "We said, 'This ain't heavy metal, we're a hard rock band,'" he recalled. "To some extent we still consider ourselves a hard-rock band. But that first album, when our lyrics changed, that is heavy metal. Was it the first heavy metal album, in every sense of the word? Yes, it was. It was the beginning of a new era."

A little over a decade ago, Iommi told the BBC that he "wasn't familiar" with the term "heavy metal" for quite a few years after SABBATH's formation. "I mean, I always looked at what we did as heavy rock," he said. "And when that term was first mentioned to me, somebody said, 'Oh, you play heavy metal.' And I said, 'What? What's that?' And this was a journalist from a well-known magazine. He said, 'Well, that's what you play; it's heavy metal.' And I'd been in America for quite awhile, so when I came back and I heard this term, I'd never heard it. And, of course, ever since that, that's been non-stop. I still think we're heavy rock, but you are put into a bag, and I'm quite proud of it now."