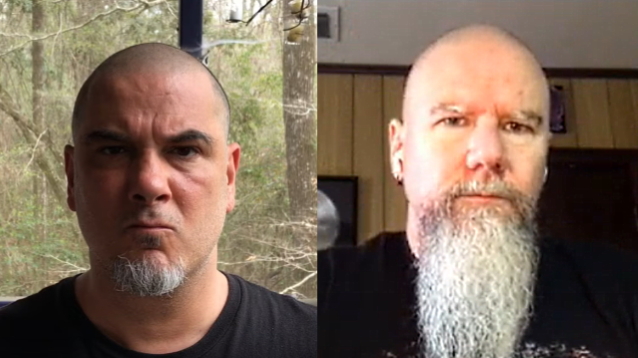 In a new interview with Heavy Culture, vocalist Kyle Thomas of New Orleans-based thrash metal pioneers EXHORDER was once again asked about his band's supposed influence on PANTERA's decision to move from a power metal act to a more aggressive form of thrash. He said (as transcribed by BLABBERMOUTH.NET): "PANTERA had an evolution. Early, they were kind of glam-ish, and I don't know if necessarily the music was as glam as maybe the appearance. But a lot of heavy metal bands… I mean, I played in heavy metal bands before I was in EXHORDER where I wore the spandex pants and black eyeliner. We all kind of did at some point — not everybody, but some people did. A lot of the thrash bands we love today — SLAYER, DESTRUCTION — they wore makeup and leather and spiked wristbands and stuff.

"PANTERA were very good before even, before [singer] Philip Anselmo joined them. They were very good and well established at what they did, a very hard-working band. Now, Phil is from New Orleans, like we are. We've known each other since we were teenagers. We've been friends for a very long time. In fact, that platinum album on [my] wall back there was a gift from Phil. That's for [PANTERA's] 'Far Beyond Driven' [album]. So, we've been friends for a long time.

"I think a lot of the controversy was media- and fan-driven more than anything," Kyle explained. "For me, I was friends with Darrell [Abbott, PANTERA guitarist] as well. I've been friendly with Rex [Brown, PANTERA bassist] a long, long time. I've known these guys for years.

"Were we doing what they ended up doing before they were? In a way, there was things that we were doing that they eventually did and we were doing them first. But that doesn't necessarily mean, I think, that there was any kind of blatant rip-off or anything.

"Phil almost joined EXHORDER for a minute. The band was reforming and I wasn't interested, so Phil was asked by the band if he wanted to sing, and he said yes. And when I found out Phil wanted my job, I took my job back. [Laughs] That's kind of how that went.

"There were a lot of bands interested in Phil at the time. I know METAL CHURCH was interested in Phil. So I think he went to the guys in PANTERA and he was, like, 'I'm really interested in doing something a little bit more than what we're doing right now. So y'all hear me out.' And I think they just kind of hashed it out.

"I know we were one of… We're still one of Phil's favorite bands," Kyle added. "He's told me this before, and people I know tell me the same thing. I know he's a huge fan, and he helped us tremendously build the underground in the Dallas/Fort Worth area when he was living out there with the PANTERA guys just building all that stuff.

"It's a frustrating thing to me, because I guess it's kind of like the poor man's version of METALLICA versus MEGADETH. I don't think it needs to be that big of a conversation anymore. Basically, we've reformed back in 2017, and we're still going strong, about to do our second album in that timeframe. And they're [PANTERA] putting some shows together with some friends to bring the band and songs back to life, which I think is a great thing. So there's room for both."

Thomas is now the sole remaining founding member of EXHORDER, which parted ways with original guitarist Vinnie LaBella in February 2020.