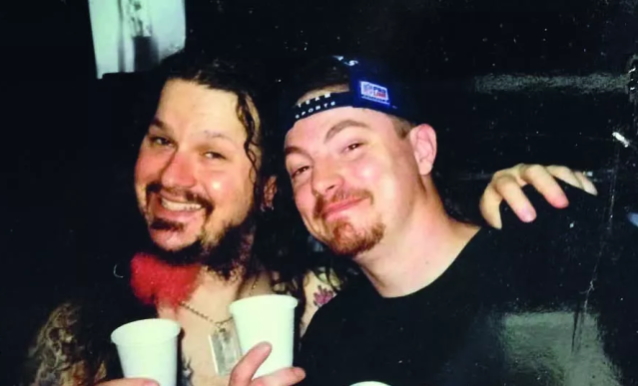 Grady Champion, who was "Dimebag" Darrell Abbott's guitar tech throughout his career with PANTERA, says that he has "signed on" for the band's upcoming tour. Grady made his comments just hours after it was announced that the influential heavy metal group will play its first shows in over 20 years in December 2022, starting with a co-headlining slot at Mexico's Hell & Heaven Metal Fest, followed by appearances at three Knotfest festivals in South America.

On Thursday (August 25),Grady took to his Instagram to write: "Ok. For all the people i've ghosted, and anyone else who is interested. I'm doing a thing. I signed on for the PANTERA tour. Rita Haney [Dimebag's longtime girlfriend] has allowed me access to some of Dime's gear and i'm bringing it for Zakk. I'm not his tech, he has a bad ass, long-time one. The plan for now is for me to run effects and help bring Dime's tone to the party. The details of the rig and stuff are still to be worked out yet.

"I started with PANTERA and I will end with PANTERA. I didn't know the 'right' thing to think, to say, to do. When I saw the headline like everyone else, I threw up, sweaty palms, heart was freaking out, I had seen that headline 1000 times in my nightmares. After it sunk in and I spoke to everyone, I felt like I would be crazy to turn my nose up and say f that. I need to be involved IF I am needed, turns out I am needed, and i'm fkn doing it.

"Thanks to my family, Jamie McAfee Champion, Garrett Champion, Landon Champion for understanding and LETTING me do this for me, for the cause, for my fallen brothers. I wouldn't be ANYwhere in life if it hadn't been for Dime and his belief in me. So I HAVE to go represent.

"Anyways, not too good with words, but heart is on the sleeve here.

"Anyone that brings up 'money grab' has no concept of reality. How much it takes from people to do this. More dedication that you'll ever see, tears, all of it. If you want to hate, don't go, I don't want to hear it. If you want a PANTERA experience, this is it. We're giving it hell, and going to give it all there is to give. Philip, Rex Brown, Zakk and Char Benante are going to bring it.

In a 2019 interview with U.K.'s Total Guitar magazine, Champion was asked to recall his favorite memory of working with Dimebag. He said: "One thing that sticks in my head is the Monsters Of Rock show in Moscow in '91. Wireless technology was VHF and one channel at the time. I turned the rig on, and we had about 15 minutes before the show. Russian walkie-talkies were coming through the rig, very 'Spinal Tap'-like. The stage was the biggest either of us had seen and I told him he was gonna have to be on a cable. 'There is no way I am going on this motherfuckin' stage with a cable!' A pretty heated argument ensued. I was out of options. A tech for METALLICA (Andy Battye) came running up with one of Jason Newsted's back-up units and saved the day just seconds before showtime. He was a monster that gig and I get chills watching the footage."

Grady said that he first met Dimebag in junior high school. But "our friendship really blossomed when the PANTERA guys let a band I was playing in open up over 100 shows with them in the club days," he said. "The night they were basically signed was the night I became his tech. I just had to convince my parents that going on the road with PANTERA was somehow better than going to college."

Darrell and his brother Vinnie co-founded PANTERA. When PANTERA broke up in 2003, they formed DAMAGEPLAN. On December 8, 2004, while performing with DAMAGEPLAN at the Alrosa Villa in Columbus, Ohio, Dimebag, 38, was shot and killed onstage by a troubled schizophrenic who believed that the members of PANTERA were stealing his thoughts.