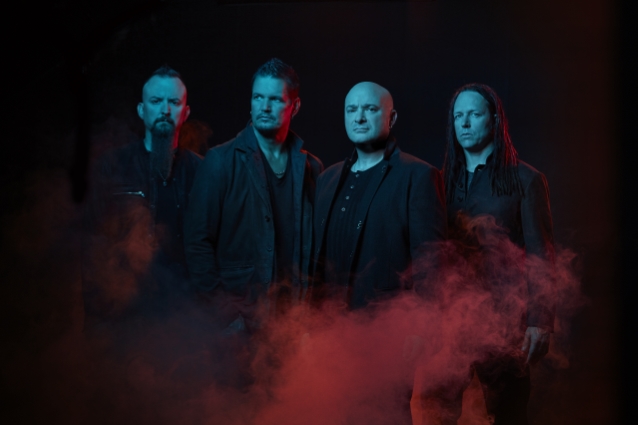 DISTURBED's 'Evolution' Ends No. 1 Streak, Opens At No. 4 On BILLBOARD Chart

According to Billboard, DISTURBED's "Evolution" earned 71,000 equivalent album units in the week ending October 25 to land at position No. 4 on the Billboard 200 chart. Of that sum, 65,000 were in traditional album sales.

"Evolution" is DISTURBED's sixth top 10 effort, and it follows the band's previous studio release, 2015's "Immortalized", which bowed at No. 1 with 98,000 units earned in its first week. "Immortalized" was DISTURBED's fifth consecutive album to enter the Billboard 200 at No. 1 — a feat shared only with METALLICA and DAVE MATTHEWS BAND.

The Billboard 200 chart ranks the most popular albums of the week in the U.S. based on multi-metric consumption as measured in equivalent album units. Units are comprised of traditional album sales, track equivalent albums (TEA) and streaming equivalent albums (SEA). The new November 3-dated chart — where "Evolution" enters at No. 4 — will be posted in full on Billboard's web sites on Tuesday, October 30.

Last month, DISTURBED hit No. 1 at rock radio with new single "Are You Ready", the band's 12th No. 1 single and the fastest chart-climber of its career, reaching the top spot in only six short weeks.

The "Are You Ready" video was directed by Roboshobo (a.k.a. Robert Schober),who has previously worked with METALLICA, ALICE IN CHAINS, MASTODON and GREEN DAY, among others.

Nearly half the songs on "Evolution" are acoustic or semi-acoustic.

Like "Immortalized", the new album was recorded at The Hideout Recording Studio in Las Vegas, Nevada with producer Kevin Churko.