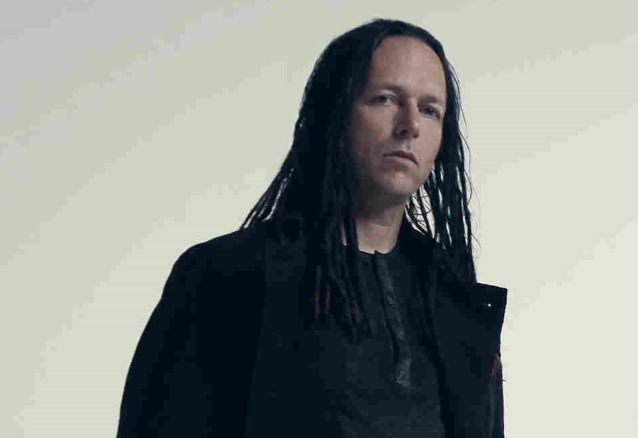 DISTURBED bassist John Moyer received his COVID-19 vaccine this past February in his home state of Texas.

The 47-year-old musician, who has been a member of DISTURBED since 2004, discussed his inoculation during an appearance on the STITCHED UP HEART YouTube livestream on Tuesday (April 6).

He said (as transcribed by BLABBERMOUTH.NET): "I'm in Austin, Texas, and [about] a month ago, we had our snow apocalypse. It froze the state, and so a lot of places lost power — when you need it most to heat your home. And we were one of those places. So we lost power for a good day and a half or so. And during that time, the Walgreens [pharmacy store chain] in my neighborhood also lost power. So they put out an announcement that they had a bunch of COVID shots, and they said, 'It's gonna go back. So first come, first served, come stand in line.' So, we slipped our way down to the Walgreens and stood in line in the cold and got it. But it was a weird story — if it wasn't for that power going out, I'd probably still be waiting to get it."

Last summer, Moyer's DISTURBED bandmate David Draiman told "That Jamieson Show" that he and his wife have friends who "lost their entire family in a week" due to COVID-19 — "seven people; all died. And if you go ahead and you buy in to the whole 'it has something to do with genetics and blood type,' well, then it makes a whole lot of sense," he said. "This poor girl lost all seven members of her family in a week — they all dropped dead from the virus. Not complications from the virus — from the virus. So it's a very real thing."

In March, DISTURBED's "The Sickness 20th Anniversary Tour" was officially canceled. The amphitheater tour, with very special guest STAIND and BAD WOLVES, was originally slated to take place last summer but was rescheduled to 2021 due to the coronavirus pandemic. It was eventually scrapped altogether.

"The Sickness 20th Anniversary Tour" was supposed to celebrate the 20th anniversary of DISTURBED's seminal album "The Sickness". On this tour, the band was expected to perform songs off the album, as well as tracks from its most recent studio release, "Evolution", and its extensive catalog.