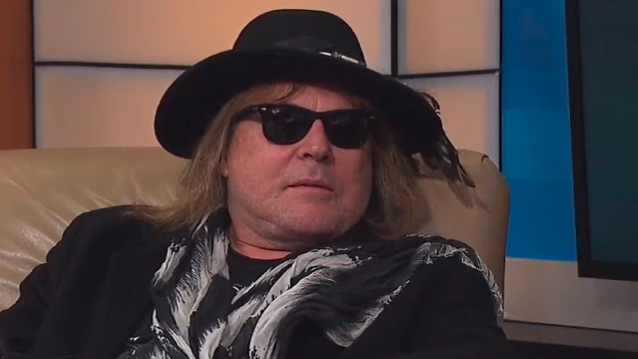 DON DOKKEN Says He Is 'Doing Much Better,' Four Weeks After Telling Interviewer His Hands Were 'Dead'

Don Dokken says that he is "doing much better" after his recent neck and spine surgery.

Earlier today, BLABBERMOUTH.NETpublished excerpts from an interview the DOKKEN frontman gave to "The Classic Metal Show" a little under a month ago in which he claimed that his hands were "dead" and "completely atrophied" after the operation, which took place in early November. The 66-year-old rocker went on to say his hands were "still paralyzed" and that he needed to "figure out what to do" once he goes on tour with DOKKEN starting in March. "Obviously, I can't dress myself," he explained. "I can't get my clothes on. I can't feed myself — I really can't. So I'm trying to find someone to go on tour with me to basically babysit me. At least I can sing. My voice feels great. I just can't hold a microphone.'"

Following BLABBERMOUTH.NET's lead, other web sites posted excerpts from "The Classic Metal Show" interview, with some highlighting the fact that Don said his hands were "dead" following the surgery, despite the fact that he was seen holding a microphone while giving a speech and performing at last month's Metal Hall Of Fame event (which took place only four days after the aforementioned interview aired).

This afternoon, the following statement was posted on DOKKEN's official social media:

"Earlier today a series of interviews were put out on music news websites regarding Don's health and use of his hands... That interview came out in early January 2020.

"Don had neck and spinal surgery in early November 2019. There were some complications; Don's right arm and hand were partially paralyzed as well as overall weakness in his body.

"Since that interview in January, Don is doing much better and his doctors do expect him to fully recover but it will take time. He does continue to have difficulty holding items and at this time is unable to play guitar, this does not affect his voice. That being said, there are no changes at this time to the upcoming show schedule.

"Don has been actively writing new music, is in great spirits, looks forward to the upcoming Dokken shows and greatly appreciates the outpouring of support.

Following the release of DOKKEN's latest album, 2012's "Broken Bones", Don was ruthlessly criticized by fans after radiation treatments from a bout with stomach cancer and eventual vocal-cord surgery hurt his performances.

Late last month, DOKKEN announced a number of live appearances this year which will include what is being billed as a "special encore performance" featuring Don Dokken and former DOKKEN guitarist George Lynch.

DOKKEN is currently working on material on a new studio album, tentatively due later in the year via Silver Lining Music, the label owned by Thomas Jensen, one of the founders of Germany's Wacken Open Air festival.

Earlier today a series of interviews were put out on music news websites regarding Don’s health and use of his hands......