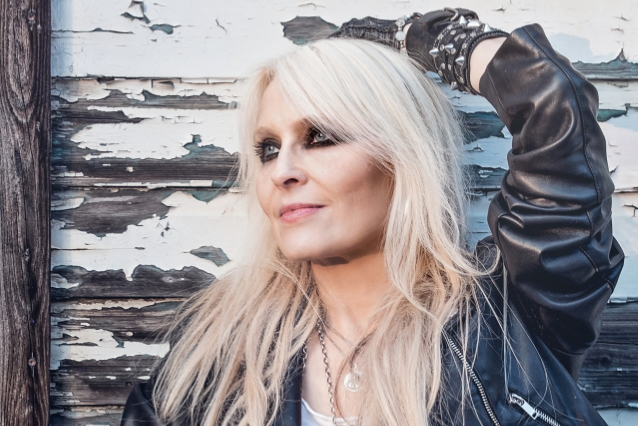 DORO PESCH Reflects On Darker Chapters Of Her Life: If It Hadn't Been For The Fans, 'I Probably Would Have Killed Myself'

In a new interview with Waste Some Time With Jason Green, German metal queen Doro Pesch was asked if she has ever thought about writing an autobiography. She responded (as transcribed by BLABBERMOUTH.NET): "At one time I started writing a book, and then I couldn't take it anymore. I really couldn't sleep anymore; I got nightmares. Because if you really wanna think about the truth, oh, man, it's worse than a horror movie. And I thought, man, I'd rather wanna move on, do more good stuff, give out good power, energy, records and do a great tour and not thinking about all the times where I almost lost my life — many times. It was so hardcore and actually almost unbelievable, I think. I haven't seen a movie that hardcore yet. So when I was starting to write, and I did it with another journalist, and then after a while, I called him up and I said, 'Hey, no more. I can't take it.' I'd rather concentrate on positive stuff. And of course, all the people, they like to see and to hear about all these intense stories or the dirt. Maybe when I'm not touring anymore, then I would write it. It was a lot of stuff which was so unbelievable. And you probably need to go to a therapist after you read that book, when it's finally done. Yeah, it's really unbelievable. And sometimes I don't even know how I survived it… Everything you can imagine was happening. So I don't wanna continue writing that book right now… It's the same like if you would think about maybe — I don't know if you were ever married or divorced — but it's like when you think of your divorce, oh, it drives you crazy."

She continued: "It was the worst nightmares. Sometimes I think, man, if it wouldn't have been for the fans or for people I love, which are the fans, I probably would have killed myself. It was, like, really, really bad. And I thought, wow… [There was] no light on the end of the tunnel sometimes. So I don't even know how something changed to the better."

Asked if the dark times were a constant through her life, Doro said: "Yes. Yes. Yeah. Even when I was a little child, yeah, yeah, yeah. Oh, man. Bad stuff. And when you're a child, there was no way out sometimes. So I don't even know why I can be so happy right now. But it's because of the music and the fans and all that stuff. I don't know. It stopped a few years ago. But I always try to put everything maybe into some interesting songs or lyrics. I can feel when people are in pain or when there's something going on and stuff, so I can be maybe more sensitive towards people who need some uplifting things or some good energy and stuff. I think that's important. So that's maybe the reason why I had to go through some stuff which was not pleasant. But I have a deeper understanding now."

Doro is currently working on material for a new studio album, tentatively due later in the year. The LP will be the follow-up to "Forever Warriors, Forever United", which came out in 2018. That double album featured 19 regular tracks and six bonus songs.

In celebration of 35 years of the "Triumph And Agony" album from her former band WARLOCK, Doro released "Triumph And Agony Live" in various formats, including CD, vinyl, cassette, DVD, Blu-ray, and a huge box set, last September through her own label, Rare Diamonds Productions. The "Triumph And Agony" artwork centered on Geoffrey Gillespie's famous original drawing of the "Warlock" embracing the blonde rock star.