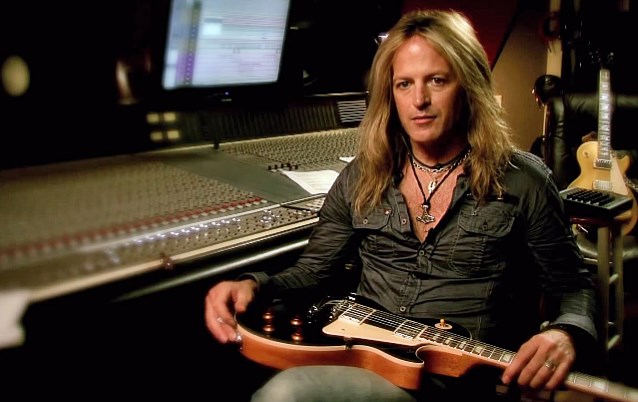 DOUG ALDRICH: Why I Left WHITESNAKE

Former WHITESNAKE and DIO, and current REVOLUTION SAINTS guitarist Doug Aldrich was interviewed by Canadian rock journalist Mitch Lafon for a recent edition of the "One On One With Mitch Lafon" podcast (Facebook page). You can now listen to the chat using the Spreaker widget below.

Speaking about what it was like working with WHITESNAKE for 11 years, Aldrich said: "[WHITESNAKE mainman] David [Coverdale] brought out so many qualities in me and brought out the best in me and I really grew a lot. I was his right-hand man for all that time. And it was great for me. He trusted me, and I took it with pride to try to do my best to keep the band moving in a good direction that [had] the integrity that David started all those years ago."

He continued: "I think David, very soon after working together, he started to trust me a lot and I trusted him. And we just hit it off musically. We wrote so many songs together that I'm just very proud of all that stuff."

Asked why he chose to leave WHITESNAKE in May 2014, Aldrich said: "First of all, we didn't know what the schedule was gonna be for 2014. We had toured a lot [in] 2013, and we had some time off around the holidays. And I wasn't sure [what we were going to be doing], 'cause David was putting together his studio. And I had agreed to work on what became REVOLUTION SAINTS, and I also had taken a gig in [Las] Vegas with some buddies, [what is] basically a supergroup cover band. It's called 'Raiding The Rock Vault', it's at the Tropicana, and it's a big show and it does really well. It was sold to me on the premise that, 'Hey, Doug, why don't you come jam with us? You get to play every night, and you don't have to go anywhere.' And all these guys are friends of mine: Howard Leese and Hugh McDonald from BON JOVI. And Jay Schellen, who I'd worked with in HURRICANE. And Robin McAuley, who I'm a huge fan of. And then some guys I hadn't met before, like Andrew Freeman; this guy can sing his ass off. So I told David, 'I'm gonna do this thing for a couple of months and see how it goes.' And I was just really digging it. It was great for me, because I was able to spend a lot of time with the family, and I kind of really realized that I needed to do that more, especially spend time with my son. And David all of a sudden said, 'Okay, we're gonna get WHITESNAKE back up and running. I need you up here, Doug.' And I was there. I had to work a little bit around the schedule that I had set up already. Of course, REVOLUTION SAINTS was gonna have to take a backburner. That was for sure. I was gonna have to work that around [WHITESNAKE's schedule], the way that I did with BURNING RAIN. But I couldn't just walk away from 'Rock Vault', because these guys were counting on me and we had already been playing for a couple of months. And I needed to make a decision what I was gonna do. And I thought, 'Well, they told me that I could cut out when WHITESNAKE needed me and I could see about getting a sub.' So that's what I was in the process of doing. And meanwhile I started working with David on what is his upcoming project. And we started working during the week on my 'off' days. And I thought we were kicking ass and we were accomplishing a lot, but David, I think he just really wanted me there full time, like I had always been before."

He continued: "Like I said, I had always been a thousand percent [focused on] WHITESNAKE and still was gonna be, and still wanted to be. But he wanted it now. And there were some tense moments. And I just felt like, I'm really proud of what we've done together. I don't wanna have it become tense or weird or whatever. 'Cause I love David. He's one of my favorite singers — he's one of everybody's favorite singers. And he still can sing his ass off, and he's still got this amazing tone. But I just wasn't feeling like we were on the same page in terms of… I needed a little bit more flexibility. David took WHITESNAKE on hiatus when his son was about that same age — he took some time off from WHITESNAKE — and I just made a decision: I need to be there for my boy. And that's what it came down to. And I didn't want it to get weird with David, and I didn't want have to have that conversarion. I just decided, 'You know what?! It's time for me to step out and make room for some new 'SNAKE blood to get in there.' Which he got Joel Hoekstra [NIGHT RANGER], who is a fine, fine guitar player; and he's gonna be awesome with him."

Doug added: "When it comes to kids, you never know until you have them. And I've got the greatest son, man. It's the best gift I could ever have been given in my whole life. And David facilitated me being able to take care of him. But also we toured so much and I was so busy, always working up in Reno with David, or up in [Lake] Tahoe, that I missed a lot of his first three and a half years. So I just made a decision, I wanna be with my boy. That's it. And I can still tour, I can still do recording. And I told David, 'If you need me for anything, man, I can kick ass for you all over the world. Wherever I am, wherever you are, I can still do anything. If you need any help, I'm always gonna be there. But just right now, I need a little time [with my son].''

Aldrich played on the last two WHITESNAKE studio albums, 2008's "Good To Be Bad" and 2011's "Forevermore", and appeared on several live releases, including 2013's "Made In Japan" and "Made In Britain/The World Records".