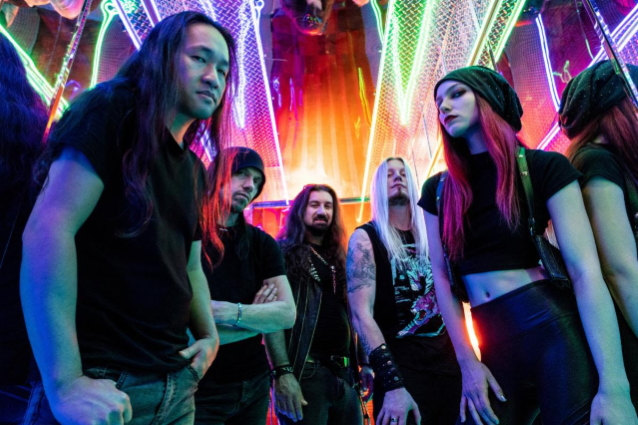 Currently on tour in Europe with POWERWOLF and WARKINGS, DRAGONFORCE has dropped a new video today for fans as a special holiday surprise. Inspired by the Skyrim game, the epic clip for "The Last Dragonborn" can be viewed below. The track is taken from DRAGONFORCE's latest album, "Extreme Power Metal", which came out in September 2019. Produced in Los Angeles, California by Damien Rainaud at Mix Unlimited, the LP was also recorded, in part, on guitarist Herman Li's livestream channel on Twitch with participation from the fans.

"The Last Dragonborn" is the first DRAGONFORCE music video to feature new bassist Alicia Vigil, who checked in from the road with the following comment: "It's been an honor and an incredible experience playing with these guys the last few years. I'm excited to be a part of their upcoming album with them, plus continue touring — and everything else in between — as an official DRAGONFORCE member!"

This past March, Li told Finland's Chaoszine that DRAGONFORCE had "a lot of music written" for the follow-up to "Extreme Power Metal". "We haven't recorded it," he said. "So we're actually gonna look for a new record deal at the moment to do it.

"We don't do music for money, so we only release stuff when we want to and it sounds good," he explained. "We're not on a hamster wheel: 'You've gotta release an album every two years.' It's hard to be creative when you just force yourself to make good music, and every artist knows.

"We don't just make music now; we're content creators at the same time. We have a pause on YouTube at the moment, but we were posting every week before that. So if you want something — an art form; I don't know if you can call YouTube 'art form' — if you want something from us, there's always something coming from DRAGONFORCE, even if it's not new music.

"When it comes, it'll be a good album that we'll be proud of," he added.

In March 2019, the "Through The Fire And Flames" music video reached a new milestone: it surpassed one hundred million views on YouTube — DRAGONFORCE's first music video to do so.

DRAGONFORCE's 2020 European and North American tour dates marked the band's first with Vigil, who joined DRAGONFORCE in January of that year.