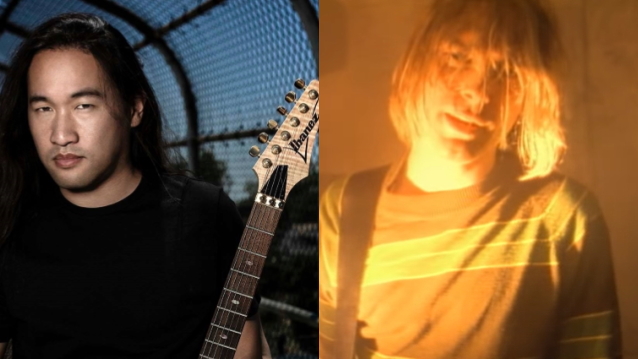 DRAGONFORCE's HERMAN LI: Why KURT COBAIN Was One Of Best Guitar Players In The World

DRAGONFORCE's Herman Li says that Kurt Cobain was one of the best guitar players in the world.

The 45-year-old musician, who was born in Hong Kong and moved to England during his teenage years before eventually relocating to Los Angeles, discussed the late NIRVANA frontman's merits as a guitarist while speaking with YouTuber Anthony Fantano about the importance of simplicity when it comes to developing your own style.

Herman said: "A lot of people ask me all the time who do I think is the best guitar player in the world. And I come up with different answers all the time. I say, 'Well, Kurt Cobain is one of the best guitar players in the world.' And they just go, 'Oh, my god. What are you talking about? I thought you knew something, Herman.' And I say, well, he inspired millions of people to play the guitar — he connected with them. So, obviously, the feeling and expression is way more important than how fast and how much notes you can play in key. If you're a jazz master or whatever, if you can't connect with somebody, it's a different thing. Sometimes the simplest thing is probably the most important thing. And we learned to do complicated stuff because when you're young, you impress your friends. It's kind of cool. You're flexing a little bit."

He continued: "I always tell people, 'Learn the simplest, simplest guitar parts and then make it your own.' So you've got the great simple stuff that you know will always sound good and then build upon that. Learning hard stuff and trying to copy people's expression is a waste of time, I think, because you're trying to be someone in a very complicated way. You're spending so much time to play this really complicated lick when you can just create your own one that's similar. I would say it's easier to make something simple sounding like yourself than a complicated part sounding like yourself."

In the last 20-plus years, Herman has established himself as one of the most recognized and influential guitarists of his generation. He is a two-time winner of the Metal Hammer Golden Gods "Best Shredder" award and has topped four categories in Guitar World's "Readers' Poll." Outside of DRAGONFORCE, Herman has performed with guitar legends Joe Satriani, Steve Vai, Tony MacAlpine and Paul Gilbert, among others.

Herman believes that to improve as a guitar player, it is important to understand the instrument as much as possible. Li is also interested in inspiring and coaching the next generation of guitar players and has contributed guitar lessons to a number of publications around the world.

Outside of music, Herman's interests include computer technology, martial arts and Porsche racing. He is fluent in Chinese, French and English.

In March 2019, the "Through The Fire And Flames" music video reached a new milestone: it surpassed one hundred million views on YouTube — DRAGONFORCE's first music video to do so.