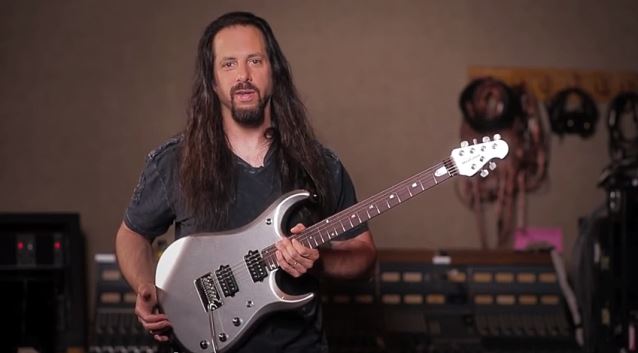 DREAM THEATER Guitarist: I Wouldn't Be Where I Am Today In My Life And My Career Without My Wife

Bryan Reesman of Attention Deficit Delirium recently conducted an interview with guitarist John Petrucci of progressive metallers DREAM THEATER. A couple of excerpts from the chat follow below.

Attention Deficit Delirium: Your wife, Rena Sands, plays guitar in the JUDAS PRIESTESS tribute band. Is there ever a chance that you two might do a musical project together?

Petrucci: We would love to. We talk about doing that. It just depends on what the style would be and just finding the time to do that. She's such a great guitar player. We're celebrating our 20th wedding anniversary. We just got from back from Vegas actually.

Attention Deficit Delirium: Artists often have a hard time handling relationships because of our crazy schedules. How have you two managed to make things work for 20 years?

Petrucci: It takes a lot of understanding. I think [due to] the fact that my wife is a musician and is in the same career, she completely knows what's involved and is the type of person who is just unbelievably supportive. When you think about how much time I have to be away because of touring…as you said it's an unconventional kind industry situation, and I'm in the studio for 10 to 12 hours a day. Meanwhile we had three kids, twins first, so she spent all that time raising them. I'm 100,000,000% convinced that I wouldn't be where I am today in my life and my career without her and that level of understanding, support and strength. It's unbelievable. It really is. The fact that she's able to give me feedback and that we can talk about things creatively and share ideas as I'm writing is just amazing. It's really, really cool.

Attention Deficit Delirium: I'm enjoying the new DREAM THEATER album a lot. When the band started, it was a mixture of progressive complexity along with melodic elements that made it radio friendly. The mid-period of DREAM THEATER got more into epic songs and complexity, but it seems like the last couple of releases have gotten back to mixing these off-kilter time signatures and crazy riffs with catchy choruses. I wrote that in my recent studio report, and there were some fans who were turned off that idea, but I think it's a good thing. Was this a conscious return to that style of songwriting, or did it just come about naturally?

Petrucci: It's definitely something that we wanted to focus on a lot. As far as the style of the band and the way that we come across, it's important to us that that always stays intact. We're a progressive band with a metal sound, and the musical style is very powerful. We try to push the boundaries, but having said that, the most important thing is the songwriting. At the end of the day, it's the compositions, it's whether or not your music reaches people. It's communication. It's always been an important element of our music — the melodic side that you said, the catchy chorus side but also the overall melodic content — how the vocals hit you, how the song message hits you — I think that separates the men from the boys in a lot of aspects as far as writing in a progressive style. The songs need to be catchy, they need to be relatable, they need to be strong, and we did focus more on that this time, there's no doubt about it. We did go in saying we're going to make a strong and bold album. It's going to be everything that we love to do, but we're going to take extra special attention on the compositional songwriting elements so that within that structure the songs are even that much more powerful emotionally.