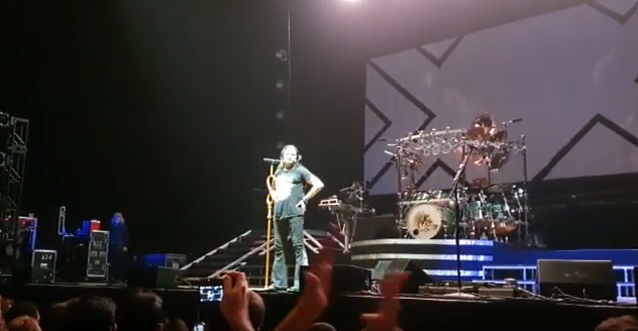 Singer James LaBrie led the audience at AFAS Live in a moment of silence as they stood quietly for 30 seconds "in memory" of the iconic RUSH drummer, whose death was announced the previous day and who was a huge inspiration for DREAM THEATER.

On Saturday, LaBrie and his bandmates took to their Twitter to express their condolences for Peart's passing, writing: "We are deeply saddened to hear of the loss of one of the world's greatest artists, lyricists and drummers of all time. To say that Neil and the music he was a part of was an influence on DREAM THEATER is a gross understatement."

Earlier in the year, DREAM THEATER guitarist John Petrucci spoke to Consequence Of Sound about the impact RUSH's music had on him as a young fan growing up in New York in the late 1970s and early 1980s.

"To me, [RUSH] was the band that changed everything," he said. "When I heard it, I just… I don't know what it is about people and music… When music just hits you in such a way, especially when you're young, you're influential and you're sort of developing your tastes, and that band, there was something about it. I just loved it. And so I just got completely sucked into all things RUSH."

He added: "One of my greatest musical memories has to do with them 'cause RUSH was the first concert I ever went to. Back in 1982, they were on the 'Signals' tour. They were playing the Nassau Coliseum on Long Island. I went there and had the worst seats ever; they were so far away. But I just couldn't believe that this was the band that I was listening to all this time, and here I am in the same building as them. How is that possible? I was just blown away by the show and the production. And you can imagine what impact that had on me, eventually making that my career."

Former DREAM THEATER drummer Mike Portnoy, who co-founded the band with Petrucci nearly 35 years ago, told Ultimate Classic Rock that RUSH was one of his biggest inspirations.

"I can't possibly overstate how much influence RUSH had on me as a young teenager," he said. "I would say from about 1981 to 1987, they were my gods. Neil Peart was my god at that point, and was a huge, huge influence on my drumming… The size of the drum set, the way I approached the drums, the odd time signatures, the progressive-styled instrumental music — I mean, just everything about RUSH at that point, when I was a developing teenager, was huge. I've seen them on every tour since then."

We are deeply saddened to hear of the loss of one of the world’s greatest artists, lyricists and drummers of all time. To say that Neil and the music he was a part of was an influence on Dream Theater is a gross understatement. pic.twitter.com/6RSX6VCAJs