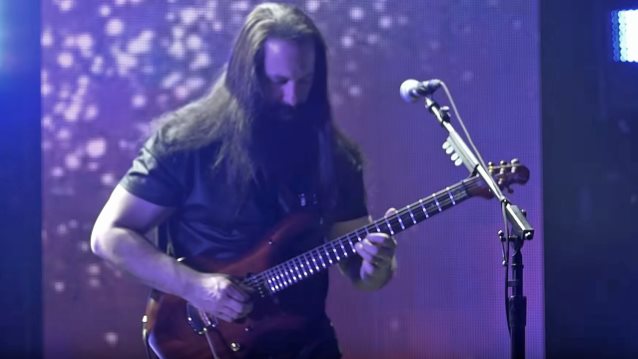 DREAM THEATER To Bring 'Images, Words & Beyond' Tour To North America In The Fall

Dream Theater World conducted an interview with DREAM THEATER guitarist John Petrucci and bassist John Myung when the band performed in Trondheim, Norway on February 20. You can now watch the chat below.

Asked about DREAM THEATER's plans for the rest of 2017, Petrucci said: "We have the second European leg [of the tour celebrating the 25th anniversary of the 'Images And Words' album] in April and May. We're gonna take the summer off, and I have my camp in August. We'll reconvene in September and we're gonna be playing in Asia. And we're gonna bring the same ['Images And Words' 25th-anniversary] tour to North America, where, as soon as we announced [the European leg], al our U.S. fans were, like, 'You've gotta come here.' So we will do that. And that'll bring us to just before the holidays. And the following year we'll get in and start working on a new album, but not before that."

DREAM THEATER's European tour in celebration of "Images And Words"' twenty-fifth anniversary kicked off on January 30 in Rome, Italy. Each performance sees the iconic progressive rock band delivering an unparalleled live set of "Images And Words" in its entirety along with fan favorites from their renowned catalogue.

DREAM THEATER last fall completed the second leg of its extensive North American headline tour which found the group performing its widely acclaimed double concept album, "The Astonishing", in immersive and interactive settings for a unique and unmatched live experience.