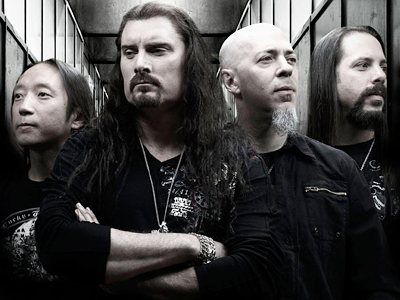 The first in a series of webisodes in which progressive metal giants DREAM THEATER share with their fans some of the intense process, along with the musical joy, that went into choosing a new drummer can be viewed at this location. (Note: The video stream may not be available to some non-U.S. residents.) The 20-minute clip is also available below.

A little more than a month after original drummer Mike Portnoy's sudden departure from DREAM THEATER, the band held three days of auditions in New York City. Over an amazing and productive three-day period, the band played, jammed and spoke candidly with seven of the world's greatest drummers, learning about them musically, personally and professionally, and assessing the fit of each drummer's incredible chops with the band's trademark prog-rock sound.

The members of DREAM THEATER have been extremely sensitive to the fact that this is not only a monumental decision in their own lives, but also a critical moment in the lives of their fans around the world. "The departure of our lifelong bandmate and friend was an unexpected and truly heartbreaking blow," says guitarist John Petrucci. "The fact that as a result of that event we'd be introduced to seven infinitely capable and uniquely talented drummers was heartening."

Commented Peter Wildoer: "My audition started with two jams where we set the levels for in ears and just felt each other out — musically, that is. ;-) After that, we went through the three songs they sent me. I guess you'll get to know what songs it was on the next episode of the DREAM THEATER video. At last, they wanted to try some new ideas. This was HAAAAAAAAARD! The ideas were in weird odd times and not one bar with the same meter. Very cool ideas, and I got my head around it so and so after a while. If those ideas end up on the new DREAM THEATER album, it will be PROG! :-) All drummers used the same kit, yes. Auditions were held in New York so no chance to bring my own. We had more than enough time to set up the drums how we wanted them. There was also a drum tech who helped out. I had no problems as I'm used to play rental kits etc when on tour."

Stated Derek Roddy: "We jammed a little while... [It] was cool, but the environment (in-ears, video, etc...) didn't lend itself to a lot of creative moments... Plus the fact that these guys were trying to 'jam' in odd times, etc. Then they threw some riffs at me to see how quickly I could spit out complex stuff. Now this was fun, but at the same time I could tell that they were looking for a dude that will come in and record an entire record in the studio on the spot. I've never wanted to work that way as I believe that if the business (need to put out a record quickly) overtrumps the musical vision (taking time and creating the best you can),then that ultimately directs where the band ends up in the future. I like to sit on riffs for a few days at least and create the best possible part (as opposed to the automatic one). As far as the band being upfront with their fans, I'm sure they want to, but there are some legal issues that needs to be addressed and that takes precedence over what 'can be said or announced.' I'm sure [the fans] can figure it out. And I am certain that they knew who they wanted before these auditions were even thought about. One thing that was said directly to me was, 'Whoever it will be, it's got to be the fans' choice, someone the fans are completely happy with.' I was very busy during that time period... only had a few weeks to learn a 20-minute song, a ballad, and a tech song with 30-part changes within the space of three minutes! Haha."