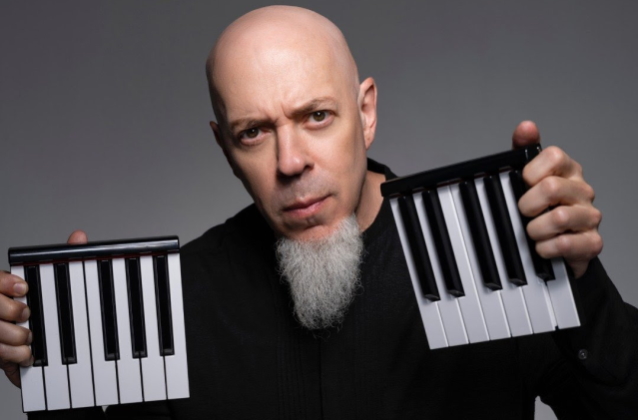 DREAM THEATER keyboardist Jordan Rudess recently spoke to the "Talking Into Infinity" video podcast about what it has been like for him and his bandmates to return to the road during the pandemic. He said (as transcribed by BLABBERMOUTH.NET): "Yeah, finally getting back on the road, it's been awesome… It's been amazing getting on the road. It was really hard to get on the road as well. But the fact that we are out here has been just incredible. We finally got through all the logistics that it took to make this happen, and luckily got through the U.S. tour, we got through the European tour successfully, without anybody getting COVID and having to cancel the whole thing. And it's been totally re-energizing. The energy of the fans has been amazing to see. I mean, it is a reality that in some locations there weren't as many people as there would have been if we weren't having a world pandemic; it's just what's going on. But when you feel the energy of the people and the joy in that they can get out there and experience live music again, it's incredible. And it's a great feeling.

"I have to say that when I first was heading out, I was, like, 'Oh my God. What's gonna happen? How is this gonna work?'' Jordan admitted. "But the reality of it has been amazing. Actually, last night was probably one of the greatest shows that I can remember because we were in Istanbul, Turkey and the crowd there — there was at least five thousand people — and it was so powerful. I walked on stage [and] I was almost like breathless for about two minutes because the energy from the crowd was so strong. I'm, like, 'Oh my God. I've gotta settle down and kind of collect myself.' 'Cause you wanna just play — you don't wanna get too crazy. But the impact of that crowd was so insane. But that was kind of related to what was going on. We just felt this love and support and energy. And [we were, like,' 'Wow.' [It was] amazing."

DREAM THEATER won its first-ever Grammy in the "Best Metal Performance" category in the pre-telecast ceremony at the 64th annual Grammy Awards, which was held on April 3 at the MGM Grand Garden Arena in Las Vegas. DREAM THEATER was nominated for "The Alien", a track from its 2021 album "A View From The Top Of The World". DREAM THEATER's previous Grammy nominations were for the song "On The Backs Of Angels", from 2011's "A Dramatic Turn Of Events" album, and the single "The Enemy Inside" from 2013's "Dream Theater".