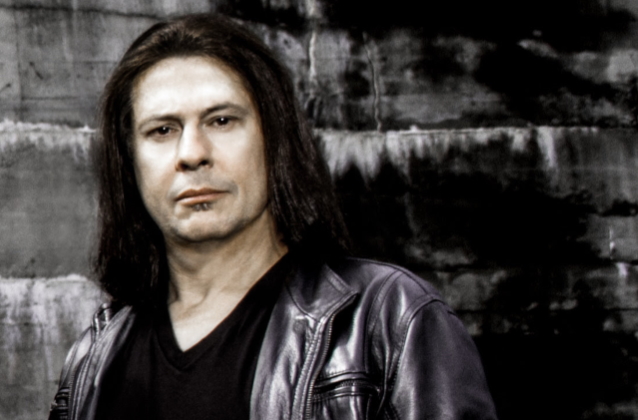 DREAM THEATER's MIKE MANGINI On NEIL PEART: 'His Influence Came At A Most Crucial Time For Me'

DREAM THEATER drummer Mike Mangini has paid tribute to Neil Peart, who died on January 7 in Santa Monica, California after a three-year battle with glioblastoma, an aggressive form of brain cancer. The iconic RUSH drummer was 67 years old.

Mangini took to his social media on Sunday (January 12) to write: "Since I heard the news, I've been looking for a particular article I did specifically on Neil about a decade ago and can't find it : ( I wanted to post that but can't, so I'll rewrite the essence of it in brief before too much time goes by:

"By definition, a derivative does not exist without a source. Call that the prime. I'm the product of 7 main inspiring drummers, Neil being one of them. In Neil's case, his influence came at a most crucial time for me and the life-changing, mid-teenage years. The school band wasn't so cool to everyone outside of it. Neither was playing the 'bells' and mallet instruments. My buying 'A Farewell To Kings' without having a clue who RUSH was, changed the game for me. Neil's creativity and the music of RUSH made lightbulbs go off in my head. I now know that to mean those very important areas of the brain were ignited that can only be ignited via music. But the key is you have to LIKE the music. Even better if you LOVE the music. I loved that album more than any other! He made the bells cool. He made the triangle cool. He made all that percussion that us 'drummers' got stuck playing on some pieces cool now. I couldn't wait to get to band practice early just to play the tubular bell part in 'Closer To The Heart'.

"With that said, a derivative can never be greater than a prime. This derivative doesn't want to greater anyway. I, of course, want to be the best I can, but when I think of moves I play that come from my main influences and that come from current ones, I cannot help but be humbled and grateful because I'll never forget where and what I come from. That leads to a really great kind of happiness. With that sad, I'm extra sad that Neil passed so young."

DREAM THEATER paid tribute to Peart during its January 11 concert in Amsterdam, The Netherlands by holding a moment of silence in his memory.

Earlier that day, Mangini and his DREAM THEATER bandmates took to their Twitter to express their condolences for Peart's passing, writing: "We are deeply saddened to hear of the loss of one of the world's greatest artists, lyricists and drummers of all time. To say that Neil and the music he was a part of was an influence on DREAM THEATER is a gross understatement."

Since I heard the news, I've been looking for a particular article I did specifically on Neil about a decade ago and can...