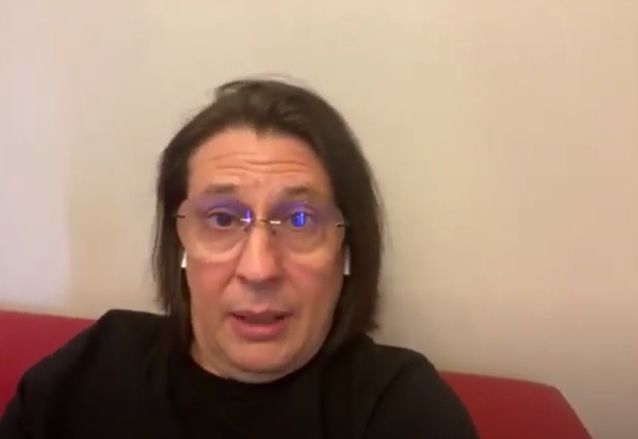 DREAM THEATER's MIKE MANGINI: 'We Care So Much About Every Note That We Play Every Night'

Ahead of DREAM THEATER's April 30 concert in Madrid, drummer Mike Mangini was asked by Spain's Rock FM to say a few words to those fans who were on the fence about attending the gig. He said (as transcribed by BLABBERMOUTH.NET): "Why wouldn't they wanna be there? We have so much fun. Look at my face smiling. This is what we do all night. The show is amazing, and it's so tight.

"I will say, seriously, we care so much about every note that we play every night that we're very alert and aware of everyone around us — ourselves, the bandmates and the audience — and we get better and better and better and play the show so well, we want everyone to see it," he continued. "In other words, we play live and we play meticulously well. It's really, really an amazing night for us, to play well. And this is what we wanna bring every night. In other words, we don't wanna try a different show; we wanna bring everyone this amazing show so everybody witnesses it. And there's nothing like it live.

"If you're asking me to speak to everyone in Madrid to say, 'Come down,' what I have to say is don't look at it on YouTube," Mike added. "YouTube's horrible — it's horrible. You don't feel it. It doesn't sound anything [like we sound] live and you don't feel it in your stomach. And to see us really playing and the way that we look at each other, you have to be there.

"So if you are interested in an experience, and you wanna experience five guys and all of our crew just really trying for excellence, then come and feel that — you need to come feel that, because it's real and it's amazing to us."

DREAM THEATER won its first-ever Grammy in the "Best Metal Performance" category in the pre-telecast ceremony at the 64th annual Grammy Awards, which was held on April 3 at the MGM Grand Garden Arena in Las Vegas. DREAM THEATER was nominated for "The Alien", a track from its 2021 album "A View From The Top Of The World". DREAM THEATER's previous Grammy nominations were for the song "On The Backs Of Angels", from 2011's "A Dramatic Turn Of Events" album, and the single "The Enemy Inside" from 2013's "Dream Theater".