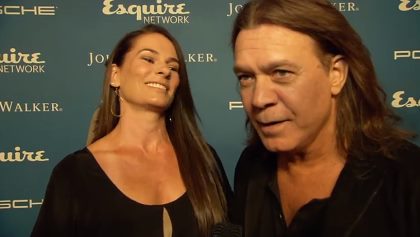 Rocker Eddie Van Halen and his wife, Janie Liszewski, were interviewed by ScreenSlam as they arrived for Esquire's 80th anniversary and Esquire Network launch celebration on September 17 at Highline Stages in New York. Check out the footage below.

VAN HALEN singer David Lee Roth gave an interview earlier in the year to Rolling Stone in which he expressed his desire to work on fresh material with Eddie Van Halen and tour outside the U.S., saying, "We have an audience and we have a potential future in many, many places . . . I don't know where the VAN HALEN future lies aside from the States."