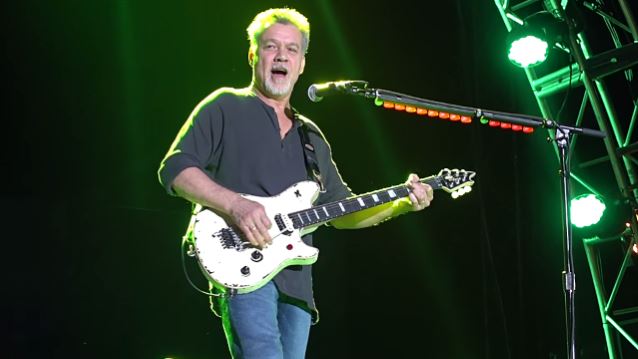 Van Halen News Desk has uploaded a new video of Eddie Van Halen sharing his experience working with Mr. Holland's Opus Foundation, which supports music education and its many benefits through the donation and repair of musical instruments to under-served schools, community music programs and individual students nationwide.

This video was a presentation piece shown Monday at the Americans For The Arts gala in New York City, honoring the Foundation with their National Music Education Award.

Van Halen has donated 75 of his personal guitars to Mr. Holland's Opus Foundation. He explains in the clip: "I wanted to give back to the community and especially kids in need who want an instrument but didn't have the opportunities that I had. And I wanted to donate instruments, because I have so many guitars, and then nobody would take them… until we found Mr. Holland's Opus. It wasn't [too long] after that that I came to your school and there's a kid playing one of my guitars. It makes you wanna cry, you know? It's really that… It was that emotional for me."