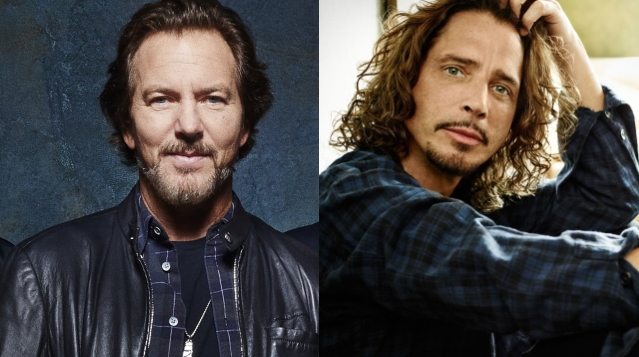 EDDIE VEDDER Opens Up About CHRIS CORNELL's Death: 'I've Had To Be Somewhat In Denial'

PEARL JAM frontman Eddie Vedder made his SiriusXM "The Howard Stern Show" solo debut today, sitting down with Howard Stern for a three-hour discussion covering everything from Vedder's childhood and his music career to his current efforts to mobilize voters ahead of Tuesday's election.

Joining in from his home studio, Vedder dazzled with a live on-air performance of Warren Zevon's tune "Keep Me In Your Heart" and revisited "Keep Me In Your Heart" for Howard and his listeners. Vedder kept the music going all throughout the morning, playing parts of "Elderly Woman Behind The Counter In A Small Town", which Eddie recalled writing while Stone Gossard watched on and sipped coffee. He also strummed a bit from "Sometimes" while trying to explain to Howard that playing guitar for him was as simple as making the right "shapes" with his fingers.

During the interview, Vedder also remembered his friendship with Chris Cornell and told Howard about the grief he still feels over the death of the SOUNDGARDEN frontman.

"I've had to be somewhat in denial," Eddie admitted (see video below). "I don't even feel like I had a choice. I was just terrified where I would go if I allowed myself to feel what I needed to feel or what I was instinctively wanting to feel or how dark I felt like I was gonna go. And because I didn't see him that often in the last 10 years — probably only, like, four or five times, and usually at a gig or something — I still haven't quite dealt with it. I'll get stronger as time goes.

"We were close," Vedder continued. "And it wasn't just because we were playing music. We were neighbors. I would hang out with him outside of the band more than even the other band guys, and I didn't know that many people in Seattle. So we would go on crazy hiking adventures, or we would go mountain biking, or we would chase the dog in the rain while drinking shitty beer— and it was cool. And it had nothing to do with anything like being around other music people or being around some kind of L.A. life. It was just cool. Like, wow, this is what a quote-unquote legit rock star, this is what he's doing — he's chasing a dog in the rain with his buddy on a Saturday night with a 12-pack of Schmidt?"

Cornell was found hanged in his room at the MGM Grand Detroit hotel in May 2017, following a SOUNDGARDEN show at the city's Fox Theatre. His body was found soon after he had spoken with a "slurred" voice to his wife, Vicky Cornell, by phone. The death was ruled a suicide.

Cornell was honored at a tribute concert called "I Am The Highway: A Tribute To Chris Cornell" in January 2019 at the Forum in Inglewood, California.

In addition to SOUNDGARDEN, Cornell found success with other projects, including AUDIOSLAVE, TEMPLE OF THE DOG as well as solo albums.