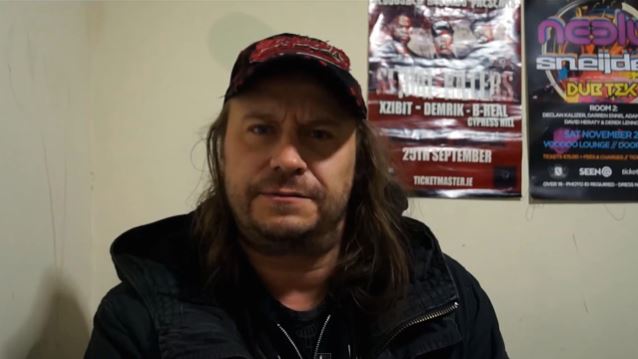 Neuweltmusic conducted an interview with vocalist Lars Göran Petrov of Swedish metallers ENTOMBED A.D. on November 13 at Voodoo Lounge in Dublin, Ireland. You can now watch the chat below. A couple of excerpts follow (transcribed by BLABBERMOUTH.NET).

On why ENTOMBED added "A.D." to its name:

Petrov: "We had to get a record out, and there were some unnecessary things that were happening. But we did the right thing and added the 'A.D.,' which stands for 'After Death' or 'Anno Domini'… whatever you want. But we are doing what bands are doing — release an album and go on tour. So that's the general story behind it. It's been a couple of years of frustration, but now we are here in Dublin, doing what bands are doing, basically. And it's practically the same band — one member out, but we have another guy in instead. But we are here playing music; that's the most important [thing]."

On whether he has any musical regrets in his career:

Petrov: "Not really. We've been playing music all our lives. But, yeah, maybe we could have released more albums during this time, maybe. It's been seven years since the last one. [Laughs] That's kind of ridiculous; it's a very long time. But we are not gonna wait that long until the next album. So, yeah, the only regret is that we have not made more albums.'

On why it took so long to release a new ENTOMBED album:

Petrov: "I don't know. Somebody was in charge [referring to ENTOMBED guitarist Alex Hellid], but nothing ever happened, and time goes fast. But now we're back into it and we're concentrating on what we're doing now and things are happening when we work with each other as opposed to against each other. So now we're on the road."