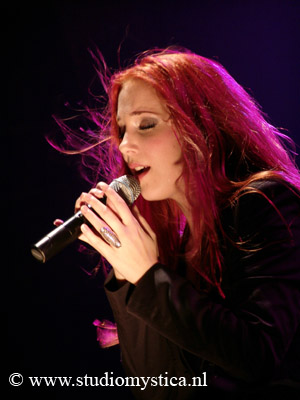 "From the beginning of February on I will be giving private lessons to those who are interested in learning more about vocal techniques, breathing techniques and stage performance. It will vary from classical to jazz, metal to rock music.

"Would you like to learn more about playing piano or guitar? Send an email to: [email protected]

"Lessons will be held in Aachen, Germany."

EPICA is scheduled to return to Gate Studios in Wolfsburg, Germany later this month to continue working on its forthcoming album. The CD, which is being produced by Sascha Paeth, will feature a session appearance by GOD DETHRONED drummer Ariën van Weesenbeek. EPICA has yet to name a full-time drummer following the departure of Jeroen Simons in 2006.

EPICA's previously announced live DVD, which was filmed on May 4, 2006 at Paradiso in Amsterdam, Holland, has been delayed until later this year, according to a posting on the group's official web site. The band's latest album, "Consign to Oblivion", was recorded in early 2005 and features a guest contribution from KAMELOT vocalist Roy Khan.