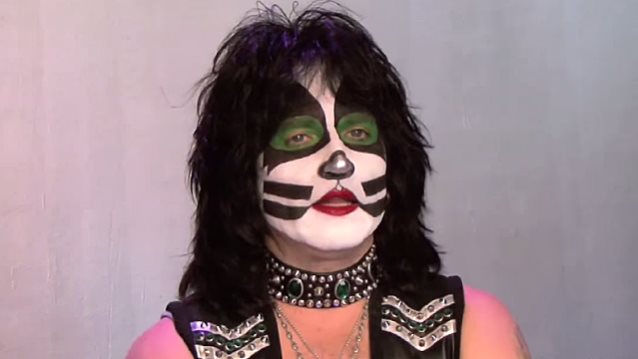 During a brand new interview with "The Cassius Morris Show", KISS drummer Eric Singer spoke about the possibility of the band one day carrying on without any original members, including main songwriter Paul Stanley.

"Everybody has broached that subject, meaning, like, fans… I'm sure you guys have heard comments through the years, the past few years, by people saying, 'Oh, I can see KISS without Gene [Simmons, KISS bassist/vocalist] and Paul,'" Eric said. "Me personally, I'm not saying it's not possible, but I doubt it will be with me… What I mean is I don't think I would wanna do that; that's what I'm saying.

"To me, Gene and Paul have always been the main cogs in the machinery, if you will, of KISS. And I mean that with no disrespect to Ace [Frehley, original KISS guitarist] and Peter [Criss, original KISS drummer], who started the original band [as] those four, and anyone that's been in the band. 'Cause everybody has come in and they brought something to the band — maybe in different increments or a different value, depending on how a particular fan may wanna see a particular era. 'Cause you've gota remember, for some people, their version of KISS is 'Crazy Nights', or their version of KISS is 1980 with Eric Carr with Ace and Gene and Paul in Australia. Or it's 'Revenge'. Or it's now. I've been around this band for 25 years, I've seen fans of all eras and all incarnations of the band, but, for me, the one constant has always been Gene and Paul; they've always been the principal songwriters and the main vocalists — that's just the way it's always been. Every record, they've done the majority of that. And there's a reason for that. And it's not to take away from the talents and abilities of other people. You can't just put songs on records because somebody goes, 'Well, I wrote a song and I have to have a song on it too.' You've gotta put what works for the record and what works for the band. And somebody is more the main guy in the band or the main songwriter, that's the way it is. And some bands, people contribute their personalities and their parts to the songs, but somebody is the main creative or driving force behind it. And it's just the way it is. This dynamic goes on in a lot of bands — pretty much almost every band, from what I've experienced."

He continued: "I don't know what the future's gonna hold for KISS when Gene or Paul, or both of them, decide that they don't wanna do it anymore, if they're going to try to create a whole new KISS and put together some kind of a show that's KISS themed and it's called KISS but it's really nobody that's ever been in the band before. So I don't know. I guess the canvas is clear and wide open for what the future may hold. And I always say, when it comes to KISS, never say never about anything, because I've been proven wrong myself when I thought they would never do certain things, and then they did. So now I always keep that in the back of my mind. Anything is possible."

Singer added: "Me personally, if Gene and Paul aren't in KISS, I don't think I have much interest in being in KISS, if they're not in KISS. What I'm saying is, if Paul Stanley decides, 'Okay, I don't wanna do this anymore. Let's just get somebody to replace Paul.' That doesn't sound inviting to me. Same thing is Gene left. I mean, if it was just gonna be Paul, Tommy [Thayer, guitar] and I with a different guy, it doesn't sound inviting to me; it just doesn't. And I don't know if that could be possible. Some people have said it could, and there's obviously people who think it couldn't. But for me, would I wanna be a part of that? I'd probably lean more towards no — at this point. It's not something that's interesting to me. Maybe it's because I've been around them so long and I realize the importance of what they do. I mean, they are the pillars of KISS, if you will."

It was back in 2005 that KISS manager manager Doc McGhee first told the New York Times that the group had "been toying with the idea of recruiting an entire band to... don the band's famous makeup." McGhee said, "KISS is more like Doritos or Pepsi, as far as a brand name is concerned. They're more characters than the individual person. I think (new members) have a legitimate chance to carry the franchise."

Simmons didn't necessarily disagree with that idea. He told Launch that the concept of original members isn't widely held by fans, and it isn't really accurate anyway. "There's no question that there's a core of fans — five-10 percent, my sense is — who believe in original members," he said. "And yet, when you look at original members, THE BEATLES are not original members — Ringo is not an original member; THE [ROLLING] STONES — barely. You know, they've had so many members come and go, but it's the STONES; and AC/DC's aren't original members; and VAN HALEN; and JOURNEY...you go down the list of every — almost every band you can think of."

In a 2012 interview with The San Diego Union-Tribute, Stanley reaffirmed KISS' intention to continue after he and Gene Simmons depart.

"The band is bigger than its members," said Stanley. "And it only takes, in this case, four like-minded people with a similar outlook and talent to further the cause and continue KISS. It makes perfect sense to me. It may not make sense to other bands, but we're not other bands. We don't live by those rules. We never have."

Simmons told Rolling Stone magazine in March that there will come a time when he will no longer be able to tour with KISS due to the band's rigorous schedule. "I'm 64 now," he said. "Three more tours. Two, if I have a life change of some kind."