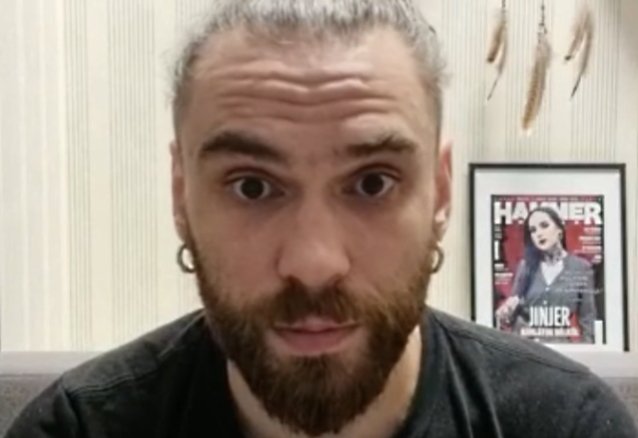 EUGENE ABDUKHANOV Of Ukrainian Metal Band JINJER: 'For One Month I Haven't Been Able To Hug My Most Beloved Ones'

Bassist Eugene Abdukhanov of Ukrainian modern metallers JINJER has once again condemned Russia's invasion of his country, calling it "the most brutal, barbaric and horrible war in Europe" since the Second World War.

Since Russian president Vladimir Putin launched a full-scale invasion of Ukraine in the early hours of February 24, more than 10 million people have been displaced, several Ukrainian towns and cities have been besieged and bombarded beyond recognition, and hundreds of civilians have been killed.

Earlier today (Friday, March 25),Abdukhanov shared a few Instagram pictures of him and his family, and he included the following message: "This the last photo we took together before the Russian invasion started. The most brutal, barbaric and horrible war in Europe since WWII, initiated by Putin, has been on for one month now. For one month I haven't been able to hug my most beloved ones, my wife Anna, my sons Danny and Roman, and honestly don't know when I will see them again.

"For one month we - people in Ukraine have been surrounded by fear, dread and suffering on one side and heroism and incredible unity on the other. Being able to help people in need and being in touch with my family via video calls are the only source of relief now.

"I appreciate all of you for the support you are giving us and Ukraine. Sincerely, I still cannot believe how many donation t-shirts you ordered and how much money we managed to collect. We will be posting on stories about how exactly these funds are directed at people here in Ukraine. As far as I know the generator and fuel which we sent to Chernihiv the day before yesterday has already arrived and it is hard to overestimate how much people need it in the city which has no electricity for weeks now."

Earlier this month, JINJER released new merchandise designs to help raise funds to support their country. The effort has resulted in more than $140,000 being raised so far, with proceeds set to be distributed directly to charity organizations of JINJER's choosing.

Due to the ongoing war in the Ukraine, JINJER has been forced to cancel all previously announced North American tour dates, including its own headline dates, side shows with IN THIS MOMENT and participation in the "Knotfest Roadshow" tour supporting SLIPKNOT.

Three weeks ago, Abdukhanov told BBC News that he had abandoned his day job to concentrate on the immediate humanitarian crisis. He added that he was working on establishing a charity "to help the military, to help the civilians" and will soon join his friends in running a shelter providing "food supplies, water [and] protection" for people displaced by the conflict.