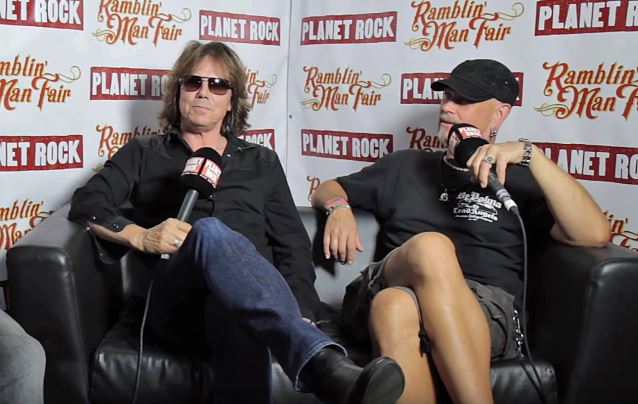 Planet Rock's Wyatt conducted an interview with EUROPE singer Joey Tempest and drummer Ian Haugland backstage at Ramblin' Man Fair on July 23 at Mote Park, Maidstone, England. You can now watch the chat below. A couple of excerpts follow (transcribed by BLABBERMOUTH.NET).

On EUROPE's plans for the coming months:

Joey: "We're looking forward to recording the next album. We'll probably go into the studio the beginning of next year and release it next year. And we'll be touring in between as well."

On how EUROPE managed to survive the the rise of grunge in the early '90s when so many other '80s hard rock acts didn't:

Joey: "You have to take the long way around. The first meeting [about a reunion] we had at Mic's [Michaeli, keyboards] apartment in 2003, we said, 'We have so much baggage, so much stigma. C'mon. We have to take the long way around. It's gonna take four albums, perhaps, before maybe some journalists are even listening to the records.' So we knew that; we knew it from the beginning. But this is what we wanna do. We wanna do it long haul, like DEEP PURPLE or whatever; we wanna do it. So that's one way of doing it. But also being curious about writing and about getting better at your instrument and not get caught up in trying to get hit singles; that's kind of dangerous. And just make great records. I thnk it started with [2009's] 'Last Look At Eden'; we started to get a grip on things. And then [2012's] 'Bag Of Bones' did really well, and now [2015's] 'War Of Kings'."

Ian: "I think also one of the reasons why we managed to come back was that we actually took a break in the '90s; we said, 'Okay, enough's enough.' So we never grinded the band down to…"

Joey: "We did solo albums. I did three solo albums. Ian played on loads of albums. John Norum moved to L.A. and did albums with DOKKEN and himself. So we learned stuff in other ways about music. And then we came back, and it felt like we'd just been away for lunch. We did 'Start From The Dark' in 2004."

On celebrating the 30th anniversary of the "The Final Countdown" album with a short tour at the end of 2016:

Joey: "We wanna mark it. It's gonna be fun to play songs like 'Time Has Come' and play the whole 'The Final Countdown' album. It's gonna be kind of different."