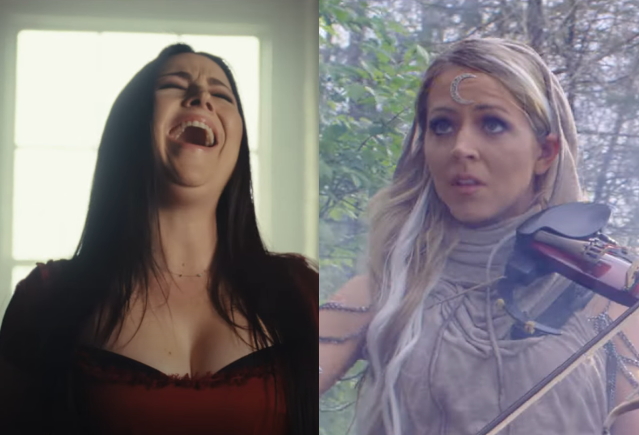 Critically acclaimed fan-favorite American violinist, songwriter, and dancer Lindsey Stirling has released the music video for her song "Love Goes On And On". The track, which features a guest appearance by EVANESCENCE singer Amy Lee, is taken from Stirling's 2019 album, "Artemis".

Back in 2017, Stirling guested on "Hi-Lo", one of two new songs that were included on EVANESCENCE's "Synthesis" album. The set was a reimagining of some of EVANESCENCE's best-loved tracks. In support of the LP, Stirling and EVANESCENCE teamed up for a U.S. tour, a trek which saw Stirling join the band onstage for a cover of Ozzy Osbourne's classic "No More Tears".

Asked how Amy ended up guesting on "Love Goes On And On", Lindsey told The Morning Call: "Well, when we worked together for 'Hi-Lo', she had been, like, 'Okay, thanks so much for being on my album. I loved working with you. Please let me know if I can return the favor for your album someday.' And I put that in my back pocket — like, 'I'm going to take you up on that.' And when I was working on this song and did the instrumental version, the song just needed something more. I knew it was — it's like a super epic song and it just needed something more, and I couldn’t think of anyone else besides Amy Lee. Her voice on this song would just be so cool. Of course, when I reached out, she was so sweet and excited to be on it. And added so much to the song. There were no lyrics when I sent it to her. I just had been, like, 'I want you to sing 'Ahhs' and 'Ooos' and she sent back all these lyrics. And I'm, like, that's feakin' awesome. So yeah, it really transformed, it was rally collaborative and she really brought her own to the song. And it's really fun to do live. That song live is just so fun."

Lindsey told the Arizona Republic in a 2018 interview: " I loved EVANESCENCE [in high school]. And I still do. To this day, I have so much respect for Amy Lee. And getting to watch her perform every night, she's such an incredible powerhouse. I feel like I have a lot to learn from her and what she's done."