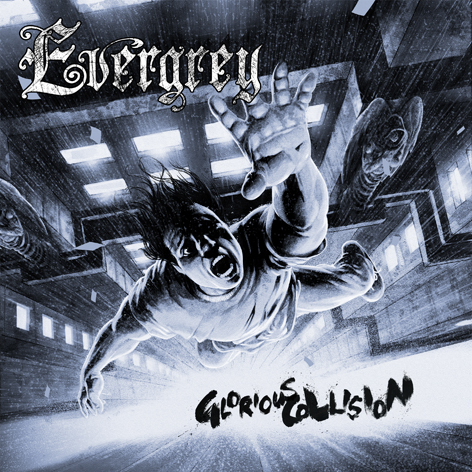 The first in an eight-part series of weekly webisodes featuring behind-the-scenes footage and interview clips with Swedish metallers EVERGREY about the making of the band's eighth studio album, "Glorious Collision", can be viewed below.

"Glorious Collision" will be released via Steamhammer/SPV on the following dates:

Audio samples of all the tracks that are set to appear on the CD can be streamed at JPC.de.

Occasionally a musician has to take a step back into the past to develop artistically. Tom Englund, guitarist and vocalist with EVERGREY, took this risk and reorganized his artistic environment. "The most recent EVERGREY lineup had reached a point where we no longer had fun as a group," he confesses, adding: "So we went our separate ways to save our friendship. There were no angry words, and we're still friends privately."

Naturally, the decision to break up wasn't easy for these long-standing friends, especially for Englund and his remaining keyboardist, Rikard Zander, for whom a continuation of EVERGREY was never called into question. Yet they both had to face a new challenge. In the beginning, we weren't sure whether we'd be able to write a new album without the wealth of experience that the previous lineup brought in," Englund says. "But after Rikard and I had composed a full three numbers during the first week, we felt that was a real coup."

Listeners will feel this positive energy throughout "Glorious Collision", which is described as "a dynamic goody bag featuring the most diverse material ever released on an EVERGREY album." "This may sound like a contradiction in view of our personnel situation, but Rikard and I have allowed more influences on 'Glorious Collision' than ever before," Englund says. "Some elements on 'Glorious Collision' are classic rock, based on a metal format, sometimes the tracks are quiet and haunting, sometimes wild, demanding and gripping."

This diversity is also expressed in the instrumentation of this extremely dynamic studio production which presents the new band members Marcus Jidell (guitar),Hannes Van Dahl (drums) and Johan Niemann (bass). "It's great to hear what a breath of fresh air Marcus, Johan and Hannes have brought into the band," Englund enthuses. "Although the entire material, except for two songs to which Marcus contributed on the compositional side, had already been decided when we started recording, they all left their own, very personal mark on this album." The great experience of Jidell and Niemann, who have worked with acts such as ROYAL HUNT and THERION, among others, and have now contributed lots of positive energy together with the 20-year-old drummer Van Dahl, can be felt throughout the album.