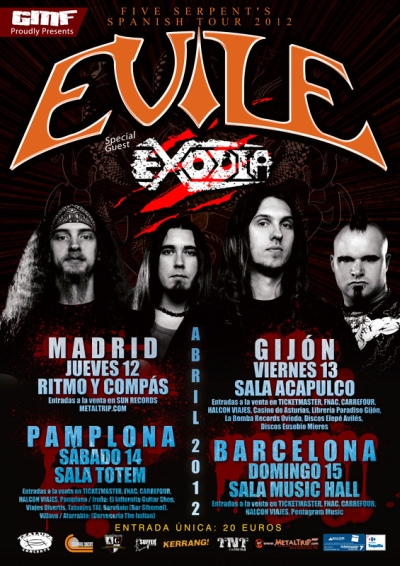 Barbara Teruggi and Maite Ramis of Spain's GoetiaMetal.com conducted an interview with Ol Drake (guitar) and Ben Carter (drums) of British thrashers EVILE before their April 15 concert in Barcelona. You can now watch the chat below.

EVILE last month filmed a music video for the track "In Memoriam", which appears on the band's recently-released new album, "Five Serpent's Teeth".

The clip was shot on April 29 in the North of England with director Ben Thornley of Sitcom Soldiers (THRICE, THE BLACKOUT, DEAF HAVANA).

Commented EVILE lead guitarist Ol Drake: "The initial idea was to release the 'Cult' video, as we did, then immediately get onto recording the video for 'In Memoriam'; this was easier said than done. It's been well documented why the song exists. When it came to getting the 'right'/'appropriate' treatment for the video, it was a lengthy process. The song is so close to all of us that we wanted to make sure the video complemented the song and its subject matter, and that all four of us were happy with how the song will be portrayed visually. If we'd have settled on the first idea after 'Cult', we wouldn't have been happy, so amidst touring and gigging, we've been working hard on getting this 100% before we move on to the next video. The song is basically about loss, which we can all relate to, so we wanted to express that in the video, while staying respectful to why the song exists."