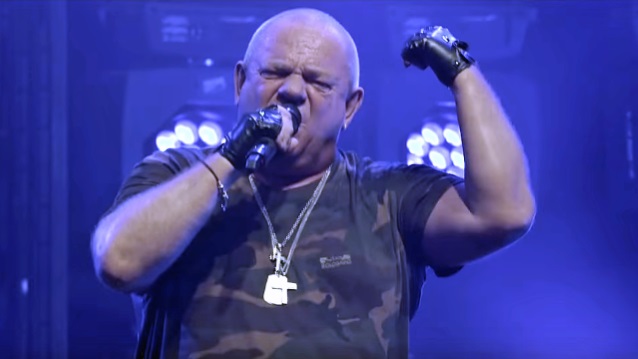 Ex-ACCEPT Frontman UDO DIRKSCHNEIDER On Possible Retirement: 'Maybe I Can Do This For Another Ten Years'

Minnesota's "The Five Count" radio show recently conducted an interview with former ACCEPT frontman Udo Dirkschneider about his current DIRKSCHNEIDER "Back To The Roots" North American tour, where his band is playing ACCEPT songs for the last time. You can listen to the entire chat below. A few excerpts follow (transcribed by BLABBERMOUTH.NET).

On what fans can expect from the "Back To The Roots" tour:

Udo: "We've already been out and are doing the second tour here in the U.S. This time, we're playing some ACCEPT songs that I never played with ACCEPT. We're changing the setlist a little bit, but of course, still all the classics are in there."

On what made him decide to do the tour:

Udo: "The thing is, you know, I want to close a chapter. ACCEPT is still on tour, they're still playing and I'm a little bit tired of this comparing who is doing the songs better and blah, blah, blah. I have so many [releases] out with U.D.O. and now I want to stop playing ACCEPT songs. Let's put it this way: There's a little door open, if, let's say, if ACCEPT maybe stopped one day and I'm still doing it, then maybe I will play some ACCEPT songs again. After this tour, this one, then there will be no ACCEPT songs anymore in the setlist."

On why it makes sense for him to stop playing ACCEPT songs:

Udo: "Now, we just finished with a new U.D.O. album and now we'll start mixing. The album is coming out in the end of August in Europe and the beginning of September, it will be out in the U.S. and Canada. Then, we start touring in November with U.D.O. Then, I think we have enough good stuff and some classic songs with U.D.O. This will be the sixteenth U.D.O. album, which is unbelievable. [Laughs]"

On his rendition of Frank Sinatra's "My Way":

Udo: "Yeah, that's a funny story, you know. We always have an outro that was called 'I Did It My Way', like the Frank Sinatra song. Then, we wanted to have it on the live DVD and also on the CD and then, the publishing [company] said, 'No, you cannot do this.' Then, I said, 'Okay, let's try to sing his song.' I did it and everybody was, like, 'Wow!'"

On having his son Sven play drums in his band:

Udo: "Yeah, let's be honest: I'm really proud of him. He's doing a really good job. But, in the beginning, when he came and joined the band, everybody was, like, 'Oh, father and son! He got maybe some 'expert' stuff and blah, blah, blah.' No, but, he's a bandmember and if we talk about private things and whatever, then it will be private. Everything goes easy and we have a lot of fun onstage when we look to each other. Yeah, it's very, very good. I like it."

On whether ACCEPT had aspirations of North American success when they were coming up in the 1980s:

Udo: "Yeah, of course. I mean, when we put out 'Balls To The Wall', we didn't expect it to sell. It wasn't an overnight success. One hundred and twenty radio stations were playing 'Balls To The Wall' and then we got the offer to be the support band for KISS. That was for us, the beginning of our success in America."

On the shape of his voice and whether he's slowing down:

Udo: "No, I like to be on tour. I like to make new albums and you know, it's like I always say: As long as I have fun and my voice is working and people come to the shows, I don't know, maybe I can do this for another 10 years or whatever. I don't know. At the moment, there is no thinking of retiring or stuff like that."

On his thoughts on the current metal scene:

Udo: "At the moment, I can really say something about what's happening in Europe. Now, there is really a new generation coming up that's listening to this kind of music. This is when we're on tour, let's say, young people like around 16 years-old. They weren't born when we came up with 'Metal Heart' and all that stuff. Yeah, I think there's a new generation for this kind of music. It looks like also during the first tour we did in the U.S., it was really successful. Then they asked us for this tour, the second time. What I've heard so far, this will be a very successful tour."

The DIRKSCHNEIDER trek, which was originally supposed to conclude with the band's North American run in January/February 2017, has now been extended through the fall of 2018.

In addition to Udo and Sven, the DIRKSCHNEIDER and U.D.O. bands include bassist Fitty Winehold along with guitarists Andrey Smirnov and Bill Hudson.

DIRKSCHNEIDER released "Live - Back To The Roots - Accepted!" last August as a DVD/2CD, Blu-ray/2CD and gatefold triple vinyl in two different colors.

After putting out the live double CD in 2016, fans were asking for a visual output, so finally, in December 2016, the show in Brno, Czech Republic was recorded for that purpose.