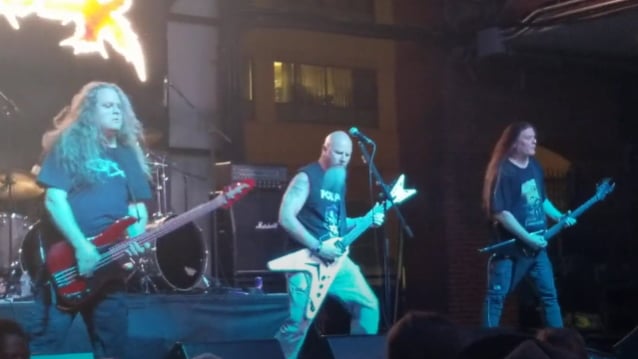 Frontman Kyle Thomas of thrash metal pioneers EXHORDER says former CANNIBAL CORPSE guitarist Pat O'Brien's appearance with his band at the 2022 Maryland Deathfest this past May "couldn't have been any more perfect."

The gig took place three months after guitarist Marzi Montazeri left EXHORDER, explaining at the time in a statement that he "decided to no longer be a part of it."

In a new interview with BLABBERMOUTH.NET, Thomas spoke about O'Brien's first appearance with EXHORDER and how the crowd reacted upon seeing the guitarist re-emerge on stage more than three years after his arrest for burglary and assaulting a police officer while his Florida home was in flames.

"He was as apprehensive about it as anybody," Kyle said. "Having not been onstage for a while, he wondered, 'Are these people going to want me around?' We were, like, 'Come on, Pat. You're Pat O'Brien. These people want to see you.' I can appreciate how he felt about it after all he had been through. I could imagine there was an intimidation factor about it. We got up there and he said, 'I think I'm going to lay low in the back, get up and play and be done.' As soon as we got onstage and people saw him, the place went nuts. I said to the crowd, 'Hey, look, you all know Pat, right? Show Pat some love.' And they went nuts. They adore this man. Who wouldn't? If you ever met him, he's one of the nicest people you'd ever meet. He's one of the greatest at what he does, too. Then he started taking pictures with people and talking [after the gig]. He had a big smile on his face. That was so worth it. Here was a guy who needed a good break in his life and we needed help from him to get the show done. It couldn't have been any more perfect."

O'Brien will join EXHORDER again this August for their live dates at Slaughter At The Southgate Revival in Newport, Kentucky and Dimestock Metal Fest 2022 in Watertown, Wisconsin.

O'Brien made headlines in December 2018 when he was arrested for burglary and assaulting a police officer while his Florida home was in flames. At the time of the arrest, deputies said he burglarized a house and charged at a deputy with a knife.

O'Brien, who had been a member of CANNIBAL CORPSE for more than two decades, was released from Hillsborough County jail on December 14, 2018 after posting a $50,000 surety bond. Several days earlier, at a hearing, a judge told the now-57-year-old musician, clad in an anti-suicide vest with his hands and ankles chained together, that he would first have to pass a drug test before he would be allowed to post bail and leave jail.

In March 2021, O'Brien was sentenced to time served and five years of probation and ordered to pay $23,793.45 in restitution. He was also ordered to get drug and alcohol evaluations and render 150 hours of community service. In addition, O'Brien was ordered to abstain from using alcohol and controlled substances and to be subject to random testing.

In early 2021, it was announced that O'Brien had been replaced in CANNIBAL CORPSE by Erik Rutan, one of the death metal's most acclaimed guitarists who is known for his time as part of MORBID ANGEL throughout the '90s and early 2000s, as well as handling vocals/guitars for HATE ETERNAL.

Shortly after the Houston-based Montazeri announced his departure from EXHORDER, the remaining members of the band — Thomas, bassist Jason VieBrooks and drummer Sasha Horn — said that they and Marzi had been "moving in different directions" and assured fans that they would "continue to thrive"

Thomas is now the sole remaining founding member of EXHORDER, which released its debut album, "Slaughter In The Vatican", way back in 1990. In February 2020, EXHORDER parted ways with its original guitarist Vinnie LaBella, who wrote much of the material on "Mourn The Southern Skies". The remaining members of the group later issued a statement saying that they would fulfill their "touring and recording obligations for 2020 and beyond."

Last December, Thomas confirmed to the "Brutally Delicious" podcast that he and his bandmates had spent much of the coronavirus downtime working on material for the follow-up to "Mourn The Southern Skies".

EXHORDER, which is cited by many as the originator of the riff-heavy power-groove approach popularized by PANTERA, completed a U.S. headlining tour in late 2021 during which it performed "Slaughter In The Vatican" in its entirety.