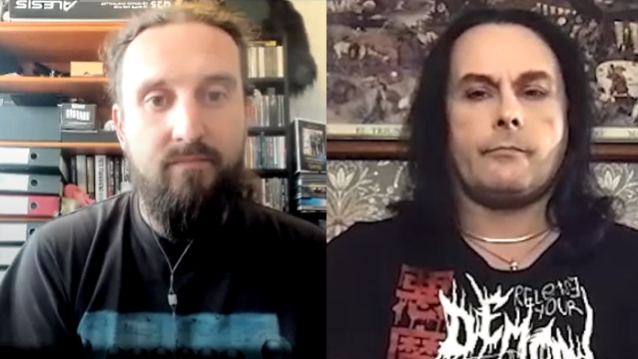 Richard Shaw, who played guitar with British extreme metallers CRADLE OF FILTH starting in 2014, and appeared on the albums "Hammer Of The Witches", "Cryptoriana: The Seductiveness of Decay" and "Existence Is Futile" before officially exiting the group in March (although his split wasn't announced until May), discussed his reasons for leaving during an appearance on the latest episode of the "2020'd" podcast. He said (as transcribed by BLABBERMOUTH.NET): "To be honest, it just got a point where I didn't wanna do it anymore. It was as simple as that.

"Touring and traveling was never a problem for me. Writing and recording — the actual music side of things — I loved and I still love. It was all the behind-the-scenes stuff [that] kind of got to me after a while," he explained. "It just got to a point where you find out things that you don't like the sound of that's been going on for a while. A lot of drama and B.S.

"I'm a dad now. My life's pretty hectic as it is without adding unnecessary drama to the bag," Richard added. "It just got to a point where I was, like, 'This isn't fun anymore.' Doing the shows is fun most of the time, but it's all the other stuff that was kind of getting to me. It's time to walk away. If it's not fun anymore, it's time to step aside."

Asked to elaborate on the "drama" that led to his departure from CRADLE OF FILTH, Shaw said: "Touring and writing and recording is the dream — it really is. But to me, it came at quite a high cost, and I wasn't willing to pay that cost. Me, the keyboard player [Anabelle Iratni] and all but one of the crew didn't wanna pay that cost. So they had to basically hire all new crew as well as a new keyboard player and a new guitar player… I don't know. There's a side of me that thinks if you just treat people better, it'd be less hassle. In a nutshell, just treat people better and show them the respect that they deserve and people kind of stick around.

"My B.S. tolerance seems to have lowered over the years," he continued. "There's a lot of stuff that I kind of let slide [in the past] that towards the end I was, like, 'I'm not letting that slide anymore.' It was as simple as that.

"I know this sounds super cryptic, but I still get on well with the band; I love everybody in the band. It's more all the people behind the scenes."

According to Shaw, he wasn't being compensated well enough for him to want to deal with the stress of playing with CRADLE OF FILTH.

"It became one of those things where financially it wasn't starting to make sense to stick around," he said. "I don't know how much to say, but you get talking to other bands and other session members — 'cause I was a session member but I also wrote for the band — and you start discussing stuff with other people who are in similar boats, who are session musicians but also write for the band, and you go, 'Hang on a minute. This doesn't sound as fair as what you've got.'"

Pressed about whether musicians in midsized metal bands can actually make money from playing music, Shaw said: "You can make money, but you've gotta be smart about it. I never made a living off of CRADLE OF FILTH — never. I had to do other things to supplement those earnings. When I was on tour, I was getting paid and it was okay. Again, to be perfectly honest, not what it should have been. But it was okay. And now that I've got a family and things, it's, like, okay, now I'm gonna be away from my family 24-7 for months on end, and I can kind of earn the same money back home and I see [my family] every day.

"I think every musician I've ever met says the same. It's, like, you don't make the living a lot of people think you do," he explained. "You need the multiple streams of income. Which I totally get, and I knew that was part of it going in. But lik I say, you talk to other musicians and you talk to other writers, and you start thinking, 'Hang on a minute. Something weird is going on. I've got a feeling some people aren't telling the whole story here.' And it just got to the point where I was, like, 'Okay, I've gotta weigh it up if it's worth me sticking around for.'

"I'll be a hundred percent honest: there was also another side of me. We started writing what would have been my fourth album with the band and I put, like, seven or eight songs forward for it," he added. "And I found myself going on autopilot a little bit. And I was, like, 'I'm doing this because I've been told I have to, not because I necessarily really feel the need to write this style of music anymore.' So there was a lot of things going on."

When CRADLE OF FILTH frontman Dani Filth announced Shaw's departure in May, he said that Richard was leaving "due to other commitments." Richard has since been replaced by Donny Burbage while Zoe Marie Federoff has stepped in for Anabelle.

Regarding what led to Shaw and Iratni's departures, Filth said: "Unfortunately, it just is what it is. If someone feels that their tenure with the band has ended, then who am I to argue with that? We have to respect that people have personal commitments and/or sometimes find the career choice of being in a band like CRADLE a tad overwhelming."

In May 2021, CRADLE OF FILTH announced the addition of Iratni to the band's ranks.