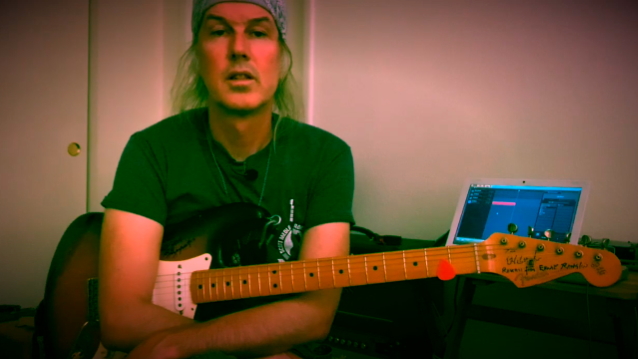 Former DIO guitarist Rowan Robertson has praised the Ronnie James Dio hologram, saying that "it's like seeing the DIO songs brought to life in a different way."

Robertson, who was 17 years old when he joined DIO, was asked for his opinion of the Ronnie hologram during an appearance on a recent episode of the "Music Mania" podcast.

He said (see video below): "I really enjoyed it. I saw it at the Wiltern [in Los Angeles]. And I think it's like seeing the DIO songs brought to life in a different way, with wonderful visuals. And you get to enjoy the songs. I mean, what's not to love? It's great."

Two other former DIO guitarists have publicly expressed their doubts about the Ronnie James Dio hologram. Last December, Tracy "G" Grijalva, who played for DIO from 1993 through 1999, said that the hologram "looks creepy" and resembles "a puppet." Nine months earlier, Doug Aldrich, who was in DIO between 2002 and 2006, told XS Rock that "Ronnie would probably not" like the hologram. "He would probably be, like, 'This is not what I signed up for.' A hologram? It's not really what he would want to be. I'm just guessing, you know, that it's something that [Ronnie's wife and manager] Wendy [Dio] thought about and she decided that Ronnie would be fine with it. But I knew Ronnie well enough to know that he was very particular and he would prefer for them to let him just die and be in peace."

After the tour's initial seven-date run was completed in December 2017, Ronnie's hologram underwent some changes before the launch of the 2019 leg of the "Dio Returns", which took place in May and June of last year.

Robertson played on DIO's "Lock Up The Wolves" album, which came out in 1990. The guitarist stayed with DIO until Ronnie James Dio rejoined BLACK SABBATH in 1991.