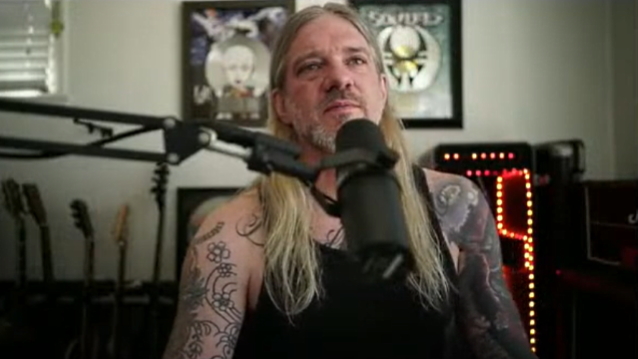 In a brand new interview with Drew Stone of The New York Hardcore Chronicles, former FEAR FACTORY bassist-turned-guitarist Christian Olde Wolbers revealed that he has not yet heard the band's latest album, "Aggression Continuum", which came out this past June. Asked what he thinks about FEAR FACTORY's founding guitarist Dino Cazares carrying on with the group without fellow original member Burton C. Bell (vocals),Christian said: "I hope [Dino] continues as long as he can, if he's passionate about it. I wish no ill will towards anybody. I hope he stays fucking working and continues his passion and his dream. That's what we all wanna do. God bless him. Good for him.

"I have enough passions in my world to continue… It's like revisiting an old girlfriend," he added. "There's women out there, man. Don't go back to your old girlfriend. [Laughs]"

After FEAR FACTORY disbanded in 2002, the band reformed in the same year without Cazares, but with Olde Wolbers moving to guitar duties and Byron Stroud being brought in on bass. That lineup made two albums — 2004's "Archetype" and 2005's "Transgression" — and then took a break. Meanwhile, Cazares formed the band DIVINE HERESY and recorded two albums with the group before rekindling his friendship with Bell and launching a new version of FEAR FACTORY, also featuring Stroud and acclaimed extreme metal drummer Gene Hoglan.

In a recent interview with Australia's "Scars And Guitars" podcast, Cazares was asked if he thinks he could make a reunion of the band's classic lineup — including vocalist Bell, Olde Wolbers and Herrera — happen if "enough money was dangled in front" of them. He responded: "Yeah, but it doesn't mean it's gonna last long. First of all, you're trying to get four guys who don't like each other together. For any amount of money, it doesn't mean it's gonna last long. It might not even make it through a whole tour. So why bother? There's too much baggage there…"

Referring to the lawsuits that were initiated by Olde Wolbers and Herrera against Cazares and Bell which led to the guitarist and the singer filing separately for bankruptcy, Dino said: "Lives were ruined. Lives were changed. Lives were at jeopardy. Careers were at jeopardy because of these lawsuits, and stuff like that. So, whether anybody can forgive each other for that, that's a whole other thing. I don't know. I don't see it for any amount of money. But if we did do it for the money, would that be fair, when there's no charisma on stage, no one wants to be there? Would that be fair to the fans? I don't think so."

Cazares went on to say that he understands the fans' enthusiasm for getting original members back together. "Of course, it's like a Fantasy Football League — you wanna put your favorite band together, your favorite team together," he said. "That's all it is. It's a Fantasy Football League, and that's all it is. And it's gonna remain a fantasy for now. I'm never gonna say never, 'cause you never know what's gonna happen. But I can say now, to get four members that don't wanna be with each other, don't wanna hang around each other, don't wanna be on the same stage with each other… It wouldn't be fair."

According to Dino, he and Bell made an attempt several years ago to reform FEAR FACTORY's classic lineup but were rebuffed by Olde Wolbers and Herrera. "We actually have tried to sit down and have conversations about mediation, about trying to put the band back together," he said. "That was something that me and Burton were actually offering to those guys to come back, but their demands were just insanely stupid; it was so high that nobody would benefit from it. So that idea got tossed out way back in 2015 — six years ago."