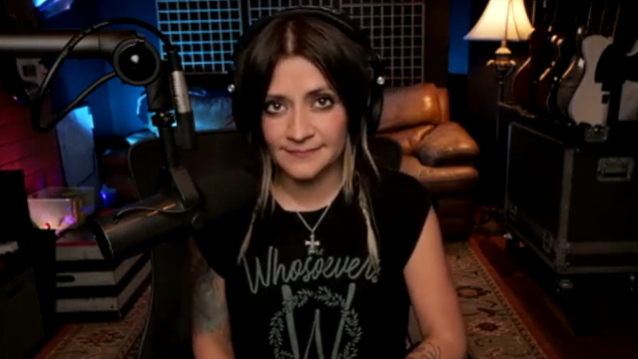 Former FLYLEAF singer Lacey Sturm spoke to the "Making Waves" podcast about the ongoing trend of artists dropping standalone singles rather than full albums. She said: "It's not the same. It's not the same listening to music. It's not the same for me as a fan of bands. It's not the same discovering a band. It's, like, 'That's cool, but what else?' 'Cause for me, a whole says a bigger picture of who they are and whether or not you really wanna follow them.

"There were bands back in the '90s when I started building a rock CD collection or whatever, I would get their CD and I was, like, that first song that I heard on the radio was good and the second one was, like, 'This sucks. I don't wanna be a fan of this band,'" she continued. "Or somebody like… I think KORN, I wasn't into them at all. And then I listened to the album and I was, like, 'Wow. It's great.' It wasn't like whatever the single was.

"Personally, as far as expressing myself, really, I'm just listening to the people that I trust with putting our career out there," Lacey added. "I'm trusting them in what they think is best, because personally all what I wanna do is just be honest and I don't wanna think about that stuff. I just wanna be able to be honest with the art and do it because it's flowing and it's real to me.

"But we did make a bunch of songs. … And we get to go slower and actually do things ourselves. … And I keep layering things. I love that part of it, that I never got to do before. Otherwise on the radio they're, like, 'This needs to be less than four minutes and it needs to have the chorus repeat here. And you can't have that bridge; it's too long.' And now we're just making music 'cause we love it. That's a perk of not shoving it into a time and having to put it all out."

Last December, Lacey released the official music video for her "Awaken Love" single. The song is a string-driven ballad that Lacey co-wrote with SKILLET's Korey Cooper. The song explores what it feels like to be immersed in the transcendent experience of perfect love.

"Awaken Love" followed the previously released "The Decree" and "State Of Me", all of which Sturm created with her husband and guitarist Josh Sturm.

Performing live with SKILLET before the pandemic shut down arena tours, Lacey has since been writing new music and finding creative ways to connect with fans. Singing on BREAKING BENJAMIN's 2020 single "Dear Agony (Aurora Version)", which peaked at No. 13 on the Billboard 200 after 20 weeks on the chart, she also performed with SHINEDOWN and others on drive-in theater stages and has hit virtual stages along with METALLICA, THREE DAYS GRACE, SEETHER and others during the Recording Academy-sponsored Octane Home Invasion festival.